The term “popping a wheelie” and the whole exhibition wheelstander sideshow in drag racing was accidentally invented by the famous Dodge “Little Red Wagon” pickup. What was meant to be a serious quarter-mile racecar back in 1964 was a failure that became the most photographed and famous pickup ever.
The Little Red Wagon was conceived by Dodge to spotlight its brand-new 1964 “A-100” forward-control pickup truck. It would race in the F/X Factory Experimental class that evolved into the Top Fuel Funny Car category we know today. But in 1964 the stock-looking nitromethane-burning missiles had no class so they got lumped into the “experimental” class. 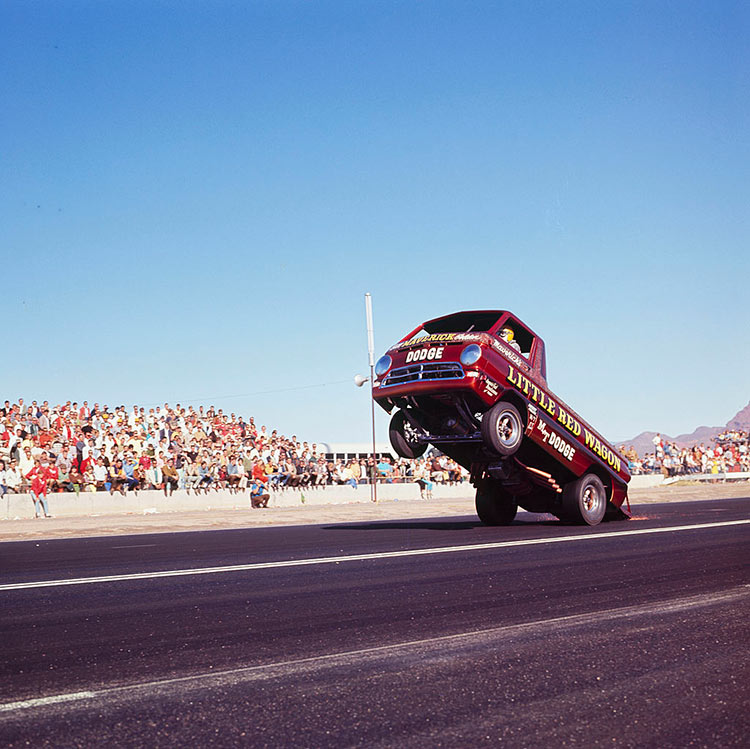 With Dodge’s new 426 ci Hemi engine mounted mid-chassis for good weight distribution and great visibility to showcase its new engine, the testing began. Freakish handling and a tendency to want to swap ends at high speeds stopped testing. The Dodge engineers needed to figure out how to tame the spooky pickup.
More modifications were performed yielding good results, so the fairly stock Hemi engine was replaced with a fuel-injected Hemi fueled by 30% nitro and alcohol. Testing at Motor City Dragway in Detroit engineers witnessed the pickup pointing straight up to the stars once the throttle was mashed. 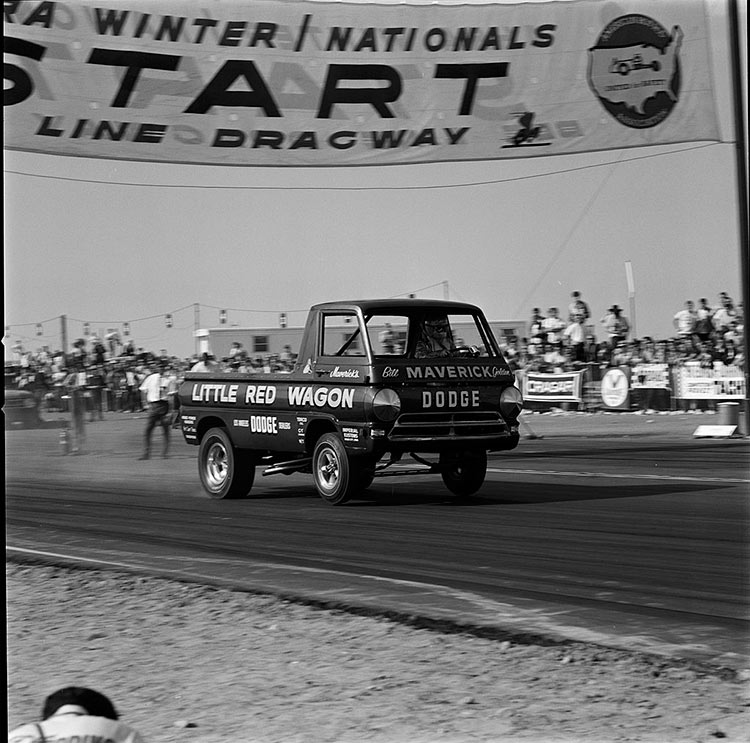 What looked like an insurmountable failure became marketing gold to Frank Wylie, Dodge’s public relations head. He wanted to use it in a TV commercial for Dodge so drag racer Bill “Maverick” Golden was paid to handle the driving duties. “I buckled in and smashed the throttle and the front tires launched to the sky,” said Golden. The world’s fastest and craziest pickup was born.

The “Little Red Wagon” Is Born 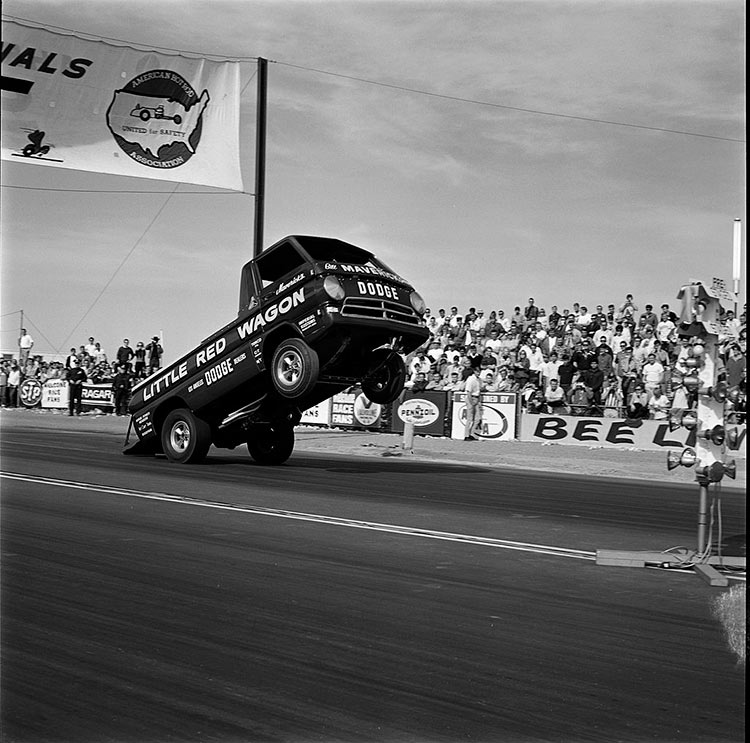 After filming Dodge asked Golden to “exploit its exhibition potential” so he brought it back to California to devise a plan. He fabricated a brake system allowing him to steer with the rear slicks and headed to Lions Drag Strip in Long Beach, California. Now emblazoned with “Little Red Wagon” on its sides Golden flipped the tailgate down, staged the pickup at the starting line and blazed down the quarter-mile strip in 11 seconds. On its rear slicks with the nose straight up in the air the whole way. 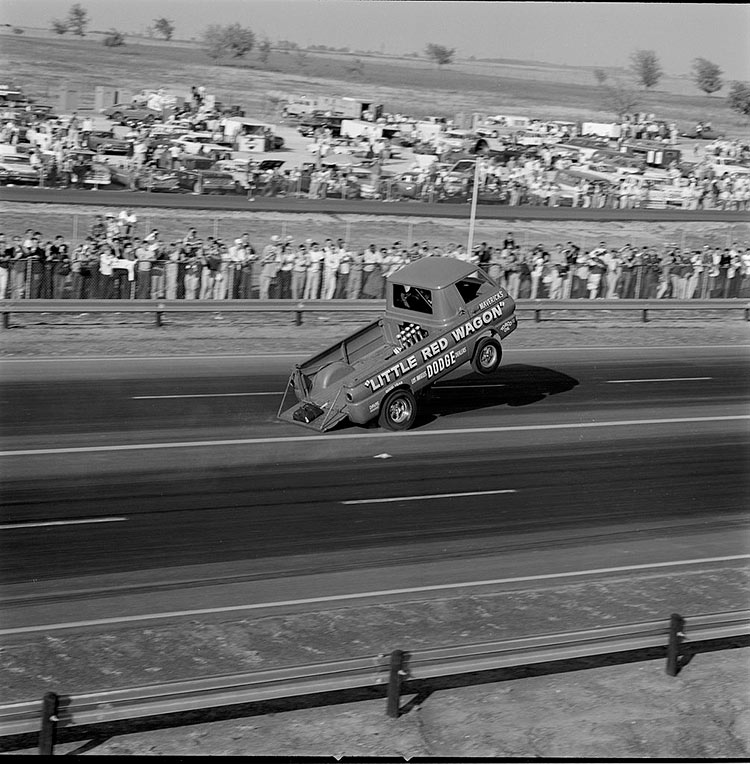 A new dawn had begun as the exhibition wheelstander was born. Between rounds or just to enliven the crowds the Little Red Wagon became an integral part of every major drag race held in the US. Drag racing promoters flocked to Golden to sign up the Little Red Wagon for their events. Golden would hit multiple races during the week and weekends to become a gypsie drag race exhibitionist.
The Dodge truck immediately spawned imitation with similarly constructed Ford Econoline and Chevy Corvair Rampvan pickups. Rear-engine freaks like the “Hurst Hemi Under Glass” Plymouth Barracuda and “LA Dart” Dodge Dart compact sedan took the concept to sedans and muscle cars.

Drag race crowds were in awe of the gravity-defying exploits of a car or truck launched down the entire strip nose up on its rear tires. Then, turning around at the end of the track and returning back to the starting line the same way.
Multiple Little Red Wagons were constructed as mishaps destroyed one or two of Golden’s golden geese. Golden died a few years ago after a 50-year reign as the wheelie king, but the Little Red Wagon can still be found at drag strips popping wheelies to the delight of the crowds.
And that’s how popping a wheelie became a “thing” for kids riding bicycles and skateboards nose-up to motorcyclists riding on their rear tires.