The Ford Ranchero was a coupe utility that was produced by Ford between 1957 and 1979. Unlike a standard pickup truck, the Ranchero was adapted from a two-door station wagon platform that integrated the cab and cargo bed into the body. A total of 508,355 units were produced during the model's production run. Over its lifespan it was variously derived from full-sized, compact, and intermediate automobiles. The original Ranchero sold well enough to spawn a competitor from General Motors in 1959, the Chevrolet El Camino. The first Ford Model T and Model A pickup trucks were created from roadsters by placing a pickup box behind the body of a car. In 1934, Ford Australia's designer Lew Bandt modified a coupe with a smoothly integrated loadbed that could be used like a car to drive to church or to deliver pigs to market. This created the coupe utility which remains a popular body style known as the "ute" in Australia. In North America, pickup trucks evolved into a heavier duty form with cabs and beds that were quite distinct from passenger automobiles. The Ranchero was the first postwar American vehicle of its type adapted from a popular sedan from the factory. It combined the sleek looks of a sedan with the utility of a light-duty pickup truck. The first Ranchero was introduced in December 1956, three months after the traditional September model year start-up, the Ranchero was based on the standard and new-for-1957 full-sized Ford platform, built on the corresponding automobile assembly line, but sold as a truck through Ford's truck division. An extremely basic standard model was marketed to traditional pickup truck buyers such as farmers, and the Custom picked up most of the options and accessories available on the Fairlane line. Models were badged with a stylized representation of a Longhorn as the symbol for the model located on the tailgate. Indeed, print advertising of the time played on the theme of the American Southwest that the Spanish model name and Longhorn symbol were meant to evoke, showing artistic representations, proclaiming it as "More Than A Car! More Than A Truck!" 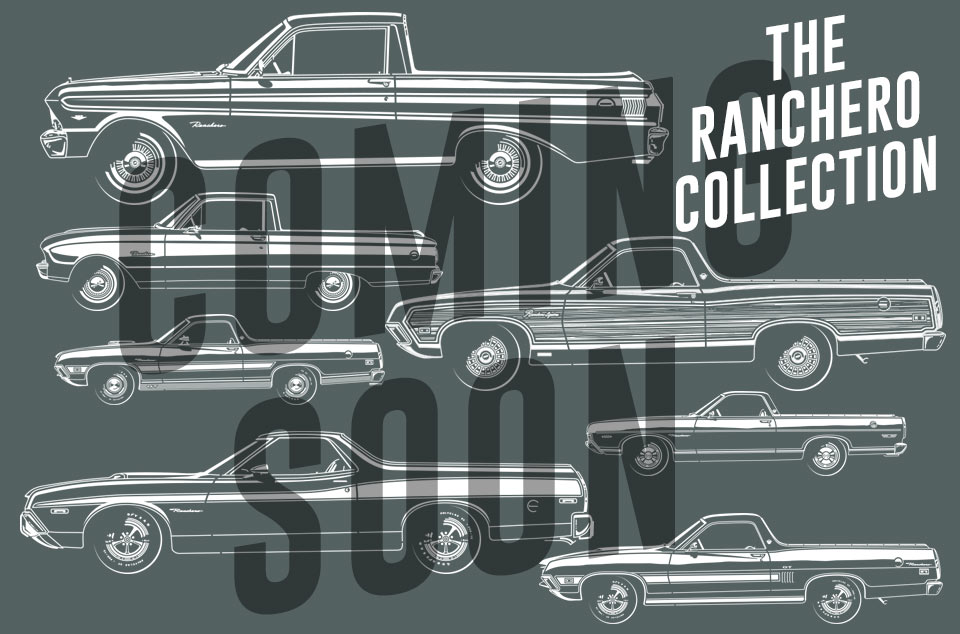