The History of Dom's Charger

The Fast & Furious franchise has captivated movie-going audiences for years with fast cars and death-defying stunts. In addition to the explosive chase sequences and racing that the films offer, the films have produced characters beloved by fans.
One of the main characters is Dominic "Dom" Toretto, played by Vin Diesel, who has appeared in 7 of the 9 movies. As these movies are focused on cars, Dom's character isn't complete without his vehicle.
When it came to creating a car for Dom, the filmmakers knew that a souped-up 1970 Dodge Charger R/T would be the perfect choice. The history of Dom's Charger covers a great deal of ground. From its origin story and the many times it's been destroyed to behind the scene's modifications that made the car ready for the big screen, Dom's Charger has been through a lot. 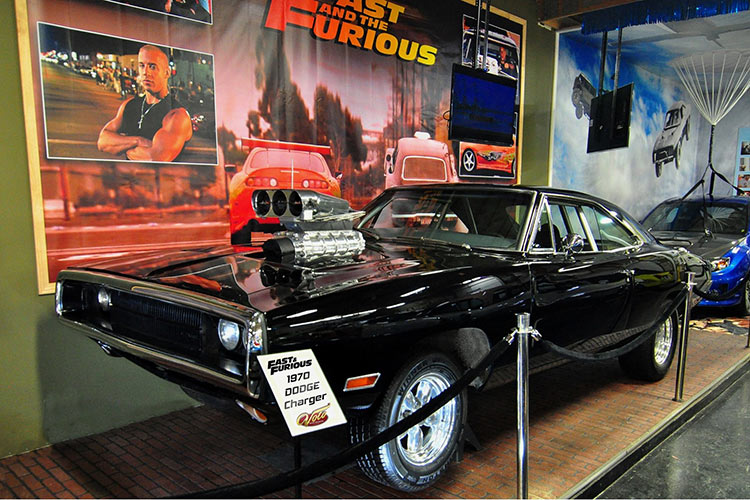 "The Fast and the Furious," the first film in the franchise, introduced Dom's 1970 Dodge Charger R/T to audiences. In the movie, audiences learn that when Dom was a child, he helped his father build the Charger. With the car's 900 horsepower, Dom's father broke the record for the time it takes to go a 1/4 mile, traveling the distance in only nine seconds.
Dom recounts that though his father was a capable driver, he died in a racing accident. The death of Dom's father leaves him afraid of driving the Charger, and he refuses to get behind the wheel throughout the film. To reveal character growth and show off the Charger on the big screen, Dom ends up in a position where he has only one car left to drive — the Charger.
At the time, there are no other cars for Dom to drive other than the Charger... bla bla bla just watch it, as we're not here to talk about the movie.
Fast forward and spoiling the end: Once both of the killers have been dealt with, Brian and Dom meet at a red light. Instead of being terrified by the car, Dom now has the confidence to race it. As soon as the light turns green, they start drag racing. After they both narrowly miss an oncoming train, Dom wins the race.
After the race ends, Dom crashes into the end of a semi-truck by accident, sending the car into the air. Dom sustains only minor injuries, but the Charger is totaled. Dom takes over Brian's Supra, leaving the Charger on the road and ending the car's story in the first movie. 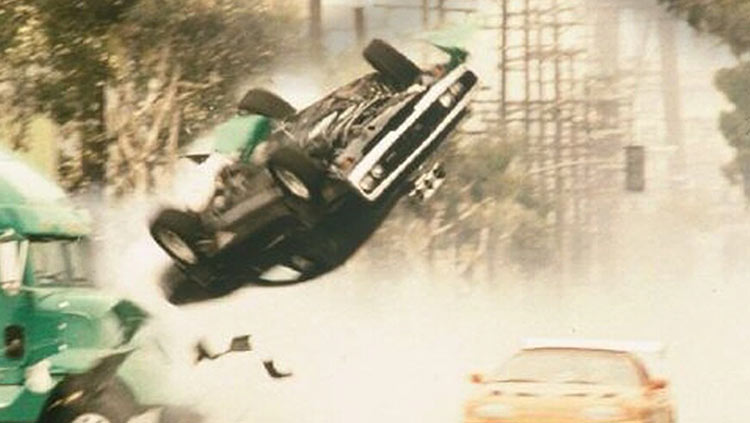 The filmmakers built three different Chargers for the first movie, along with a buck. In film, a buck is a partially built vehicle that is attached to another working vehicle — it allows the actors to focus on saying their lines instead of driving the car. Each of the three Chargers had different purposes. One built for stunts, another for roll-over and the other, referred to as the Hero Charger, was built for close-ups.
To create the Hero Charger audiences see on screen, the filmmakers wanted a 1970 Dodge Charger R/T as the base. However, the filmmakers had difficulty finding a 1970 Dodge Charger R/T and had to modify a 1969 Charger to look it like it was from 1970. They also implemented Cragar 200-S wheels and a fake BDS 8-71 Roots-style supercharger to really make a statement with the car's look.
In the movie, the car's specs include Hedman headers, Hotchkis suspension, slide brakes, Wilwood discs, a Flowmaster exhaust, a mounted supercharger and a Holley fuel pump. Dom's Charger also featured Nitrous Oxide to give the car an extra boost of speed when it needed it. The car's use of Rear-Wheel Drive and Continental Sport Contact Tires offers the car superior handling and grip while out on the road. 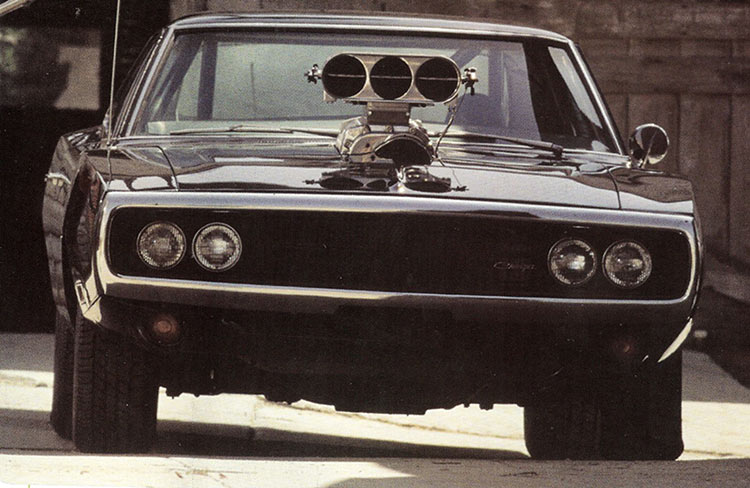 Common Questions About the Film's Charger

To provide some reference points for what all these pieces of equipment mean, we've created a list of the most commonly asked questions about the original The Fast and The Furious Charger:

How Much Horsepower Did Dom's Charger Have?
The movie-version of the muscle car packs a whopping 900 horsepower that gives the vehicle the ability to speed past other cars while on the road. The addition of a N.O.S. 250 HP plate nitrous injection system gives the engine the ability to reach up to 1,100 horsepower whenever the N.O.S. is activated.


What Engine Was in Dom's Charger?
The car featured two engines — one that audiences saw and another that actually powered the car.
The Show Engine In the shots of the Charger in Dom's garage, audiences see a Hemi racing engine mounted in the front of the vehicle. This supercharged engine was a beast, rumored to have 900 horsepower and a 250 shot nitrous. Its power added to the plausibility of how fast the Charger could really go.
Since the engine was so powerful, the filmmakers didn't actually use it for filming. A 1970 Dodge Charger outfitted with that kind of engine would be difficult to control on the road, which could be a problem for filming highly coordinated driving shots. After getting the shots of the engine mounted in the car, the filmmakers shipped the engine back to the supplier. As such, the engine in the hero Charger isn't actually a Hemi.
The Real Engine Since a 900 horsepower engine wouldn't be practical for filming purposes and could be incredibly difficult to control, the hero Charger actually ran on a big block performance built 440 Magnum engine, which is still in the car today. The roll-over Charger ran on a 318 engine.


What Year Is Dom's Charger in The Fast and The Furious?
The Dodge Charger R/T that Dom uses is largely considered to be from 1970. However, 1970 Chargers are difficult to find in good condition due to Hollywood's love of using them for dangerous stunts. To get around this difficulty, the filmmakers had to modify earlier Dodge Charger models to make them look like they were from 1970.
For example, the hero car used for close-ups in "The Fast and the Furious" was actually a Dodge Charger from 1969 that was customized to look like it was from 1970. The filmmakers did a good job with the conversion, as the car took on the appearance of a newer model perfectly.


What Is Dom's Charger Worth?
Determining the value of Dom's Charger is difficult to say, especially since there have been so many versions of it. It's likely that the original Hero Charger from the first movie is the most valuable, as its the most iconic and desirable for collectors. To give you an idea of how much the car might sell for, consider that the original 1968 Ford Mustang used in the classic film, "Bullitt," recently sold for $3.74 million.
Since the 1970 Hero Charger used in "The Fast and Furious" kicked off the mega-popular franchise, its value is likely very high. It also helps that the hero version of the 1970 Dodge Charger RT has been well taken care of since filming wrapped and is still in the same condition as it was on screen.
While the hero car isn't for sale, if it were, collectors would likely expect to pay top dollar for it.


What Is the Blower Motor on Dom's Charger From The Fast and The Furious?
The blower motor is one of the most memorable parts of Dom's Charger. Typically a blower motor helps to circulate air into and outside of your car. The blower motor helps to pull in air from the outside and push it through the vents of your heating or A/C systems.
However, a supercharged blower, like the one on Dom's car, can help you pack more fuel and air into a car's cylinders, giving the car a boost in horsepower, starting speed and bottom-end performance.
The movie has the supercharged blower motor mounted inside the front carriage of Dom's Charger, coming through the hood, so the blower's prominently displayed for all to see. Like you might expect, the blower on the Charger is purely aesthetic in the movie and didn't actually offer any extra abilities to the car. 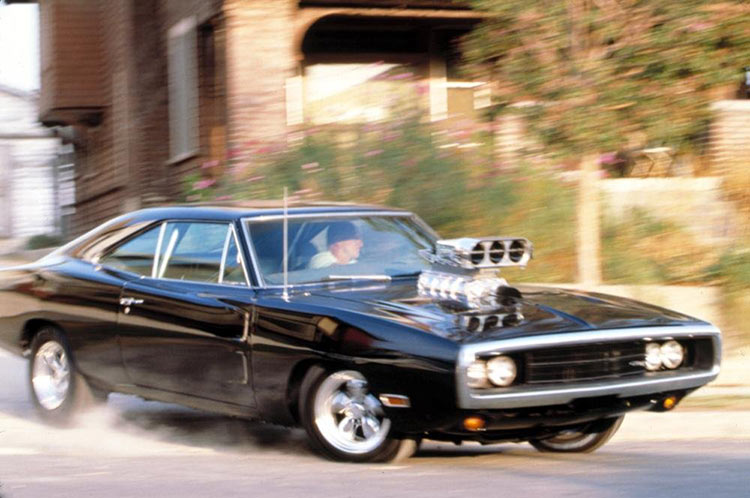 Illustrating Dom's Dodge Charger was not that easy. I wanted to illustrate the Charger from the first movie, and that's were the troubles started. Finding photos and reliable information about the original was Challenging. There are so many clones that have been made throughout the years. Tons of versions with different blowers, wheels of all size, mirrors of all type, but I think I nailed it!