Picking the Best Version of the Alfa Romeo Spider

Are you sitting down? The Alfa Romeo Spider, one of the most loved classic sports cars ever produced, was initially panned by the day’s automotive press.
“We found almost no disagreement among members of our staff about the appearance of the new model–no one liked it as well as the Giulietta or Giulia,” wrote Road & Track. “One condemned it as a contrived design with meaningless styling gimmicks.”
At least they liked the drivetrain, a twin-cam, inline-four topped with one of the prettiest valve covers ever produced. A five-speed transmission delivered relaxed highway cruising, while four-wheel discs offered class-leading brakes. The chassis was not that exotic, but it worked well, with a well-supported live axle at the rear and independent suspension up front. Compared to the rest of the pack, the Spider was plenty advanced.
A year after its release, the car received perhaps its biggest boost: Dustin Hoffman, at the time an unknown stage actor, co-starred with a red Spider in “The Graduate,” one of the biggest motion pictures of the year.
The rest, as they say, is history. Alfa Romeo would keep the much-loved Spider in production through 1993, with updates dividing the model run into four distinct generations.
Which one is most deserving of a space in your garage? To find out, we sampled one from each generation of these wonderful roadsters at historic Thompson Speedway. While we didn’t run hot laps, this fun, 1.7-mile track offers tight turns that play perfectly to the Spider’s strengths. 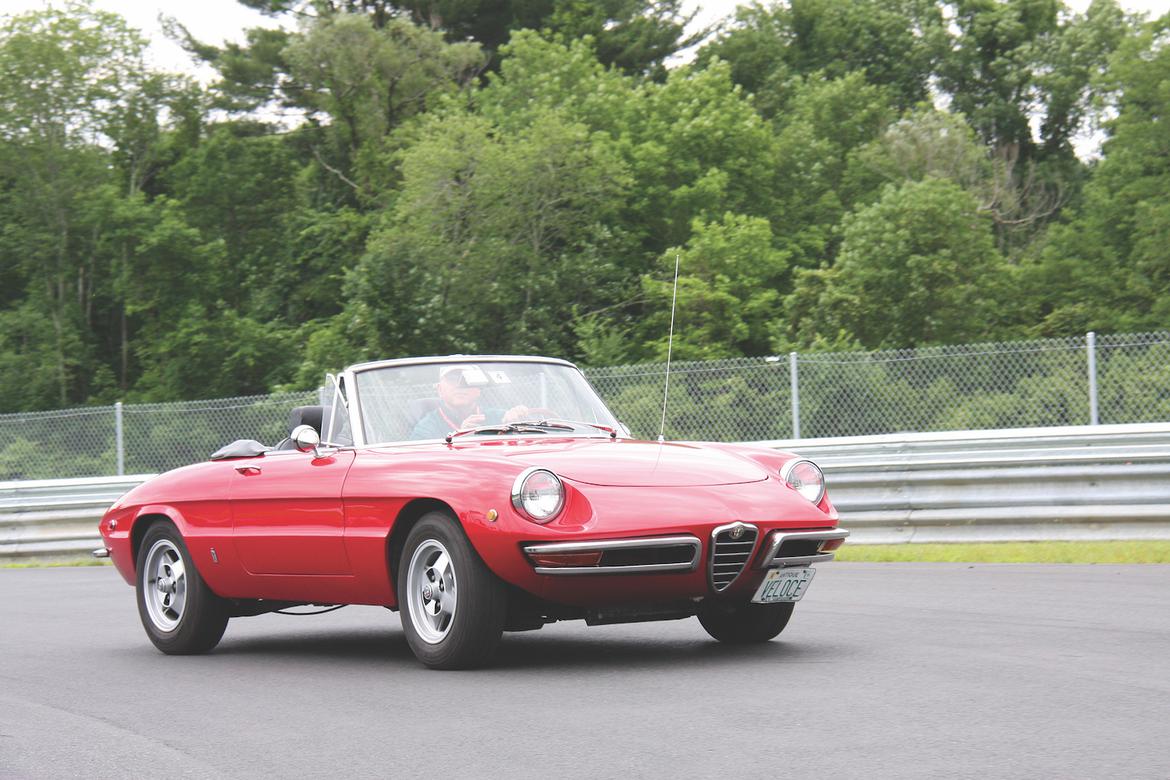 The A rounded tail easily identifies the Series 1 cars, while the nose features minimal bumpers flanking that unmistakable Alfa Romeo grille. This is the one that started the legend.
Despite a relatively short model run, the changes came quickly. The original 1570cc engine grew to 1779cc for the 1968 model year; Alfa responded with a name change, replacing Spider 1600 with 1750 Spider Veloce. (The famed “Duetto” name, chosen by a contest run by Alfa Romeo, could not be used officially due to trademark issues.)
Alfa wasn’t able to meet American emissions laws for 1968, forcing the manufacturer to sit out that year. When they returned for 1969, the American-market Spiders saw the original twin side-draft carburetors replaced with SPICA mechanical fuel injection. 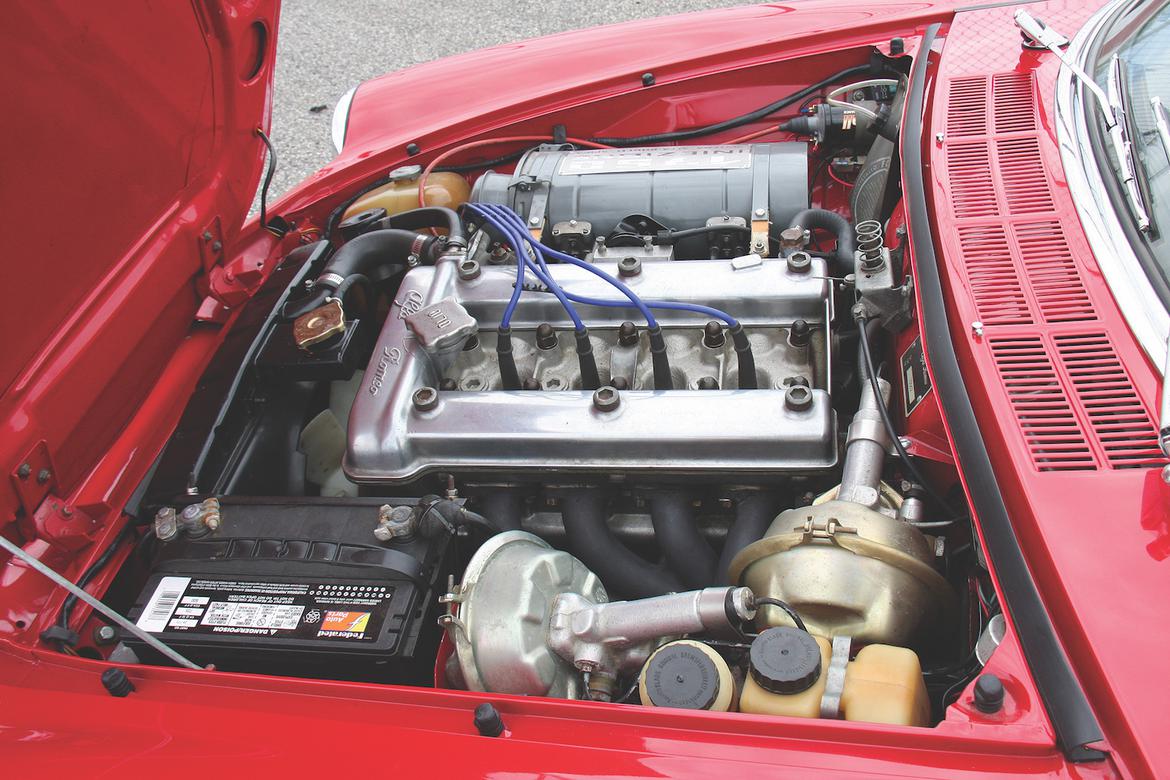 Behind the Wheel
Once behind the wheel, you immediately admire the twin gauges stashed inside the compact binnacle. The painted metal dash and its three auxiliary gauges recall a simpler time when sports cars were pure.
You sit on–not in, but on–the nicely upholstered bucket seats. Steve says that the seat foam kit came from a reputable supplier. The seating position is typically Italian, with arms stretched out and the shifter high and away in the center console.
The mechanically injected 1779cc engine starts easily, and while pulling away from the paddock we fell instantly in love: great revs plus a light steering feel.
The gearing is spaced well and the transmission shifts easily. The clutch and gearshift are light to the touch. It is said that Mazda engineers drove Alfa Romeos in order to understand what a sports car should shift like. 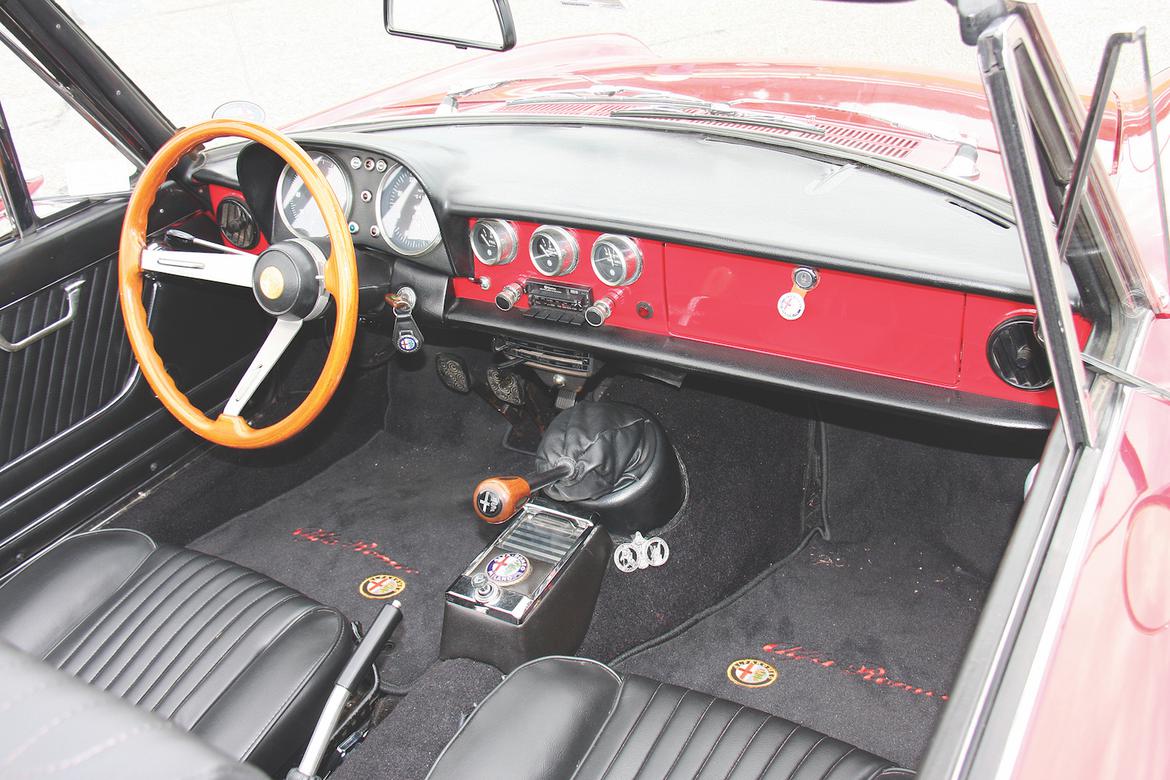 There is some body roll, but it is not excessive. The car is easy to drive at the limit with a bit of progressively worsening understeer. This could be dialed out with suspension changes, but is the right answer for novice drivers.
If you shift suddenly in mid corner, or try to upset the balance of the car, snap oversteer can be easily induced. That said, it is easily controllable, and bringing the car back under command is not a chore at all.
This early Spider is not fast by any means, but it is certainly quick enough to be fun to drive. Zero-to-60 times are in the high-nine-second range. The four-wheel-disc brakes, a rarity among the rest of the field in 1969, easily slow the car, even during enthusiastic maneuvers. 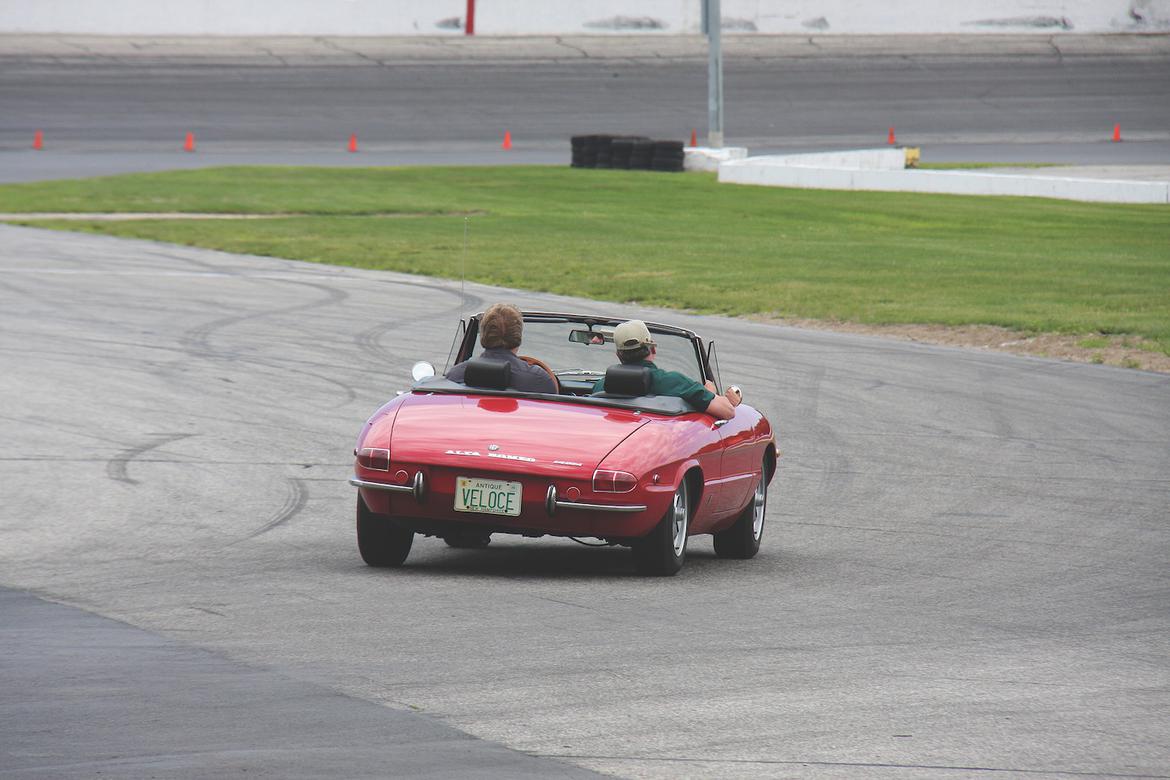 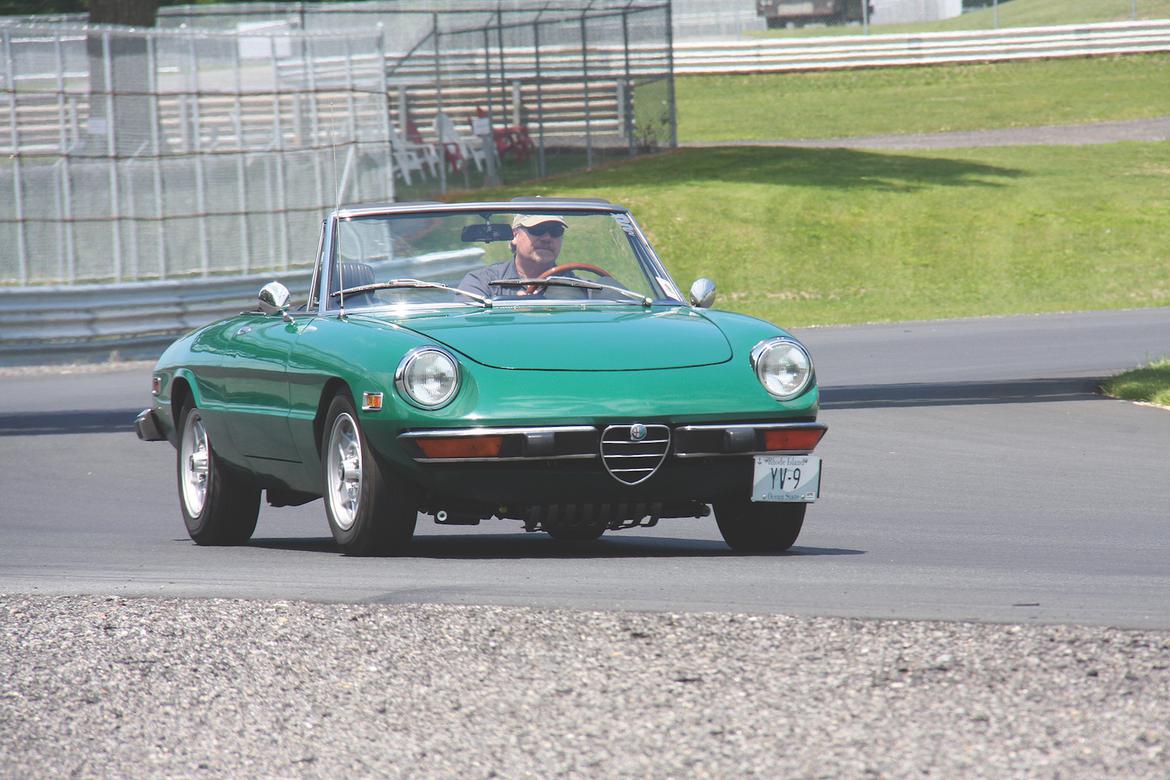 The Alfa Romeo Spider sat out the American market for the 1970 year, but when it returned something looked different: The car’s iconic boat tail, like a lot of other things, didn’t make it out of the 1960s. The chopped-off Kamm tail that replaced it easily differentiates the Series 2 Spider Veloce from the originals. The new rear end transformed the Spider’s look–some say for better, others insist for worse–while lopping off 6.2 inches from its overall length.
More differences accompanied the new tail, including slightly beefier bumpers featuring a bit more rubber than before. Inside the car, the driver was greeted by pedals that were hung from above, instead of hinged at the floor. Behind the driver, Alfa reshaped the package shelf to give the impression that this was now a four-seater–although reality said otherwise.
As with the prior generation, more changes came with time. A 1962cc engine arrived for the 1972 model year, necessitating another name change: 2000 Spider Veloce. Updated crash requirements brought full rubber bumpers starting with the 1975 model year and, as before, changing American emissions requirements kept the Spider in a state of flux throughout the ’70s. 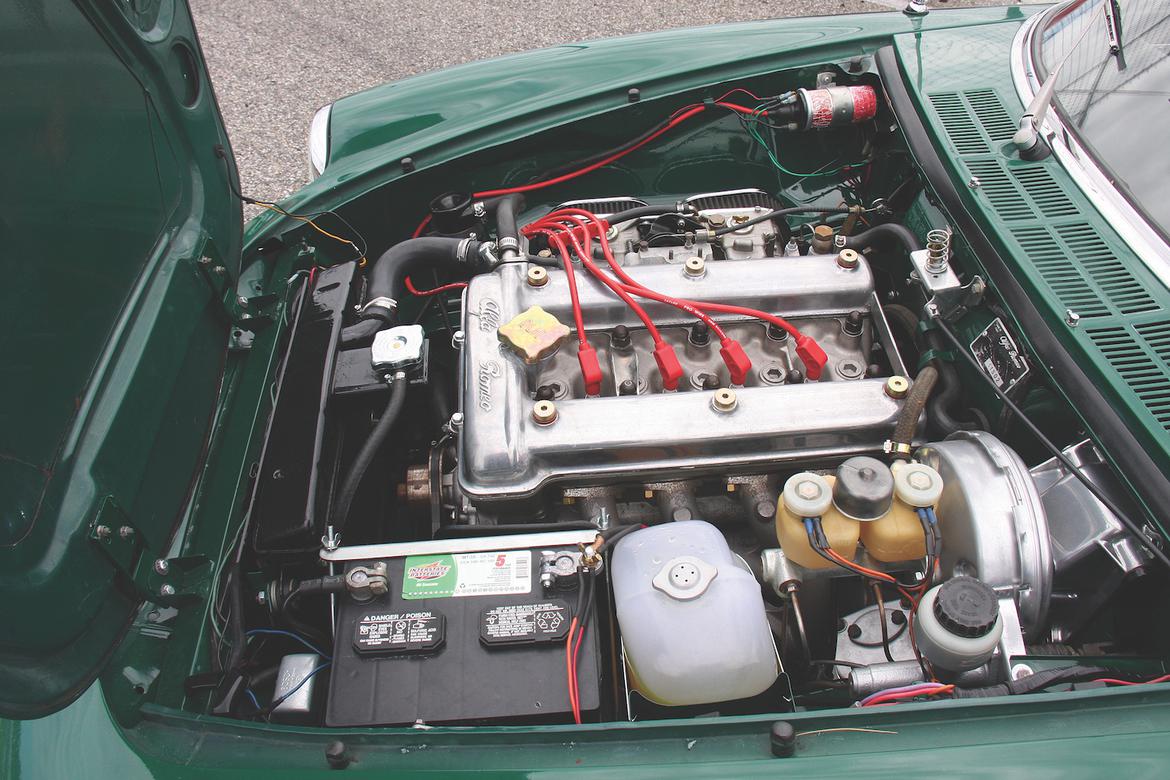 Behind the Wheel
The 2.0-liter car is surprisingly different from its predecessor. First off, you sit down in the seats better than you do in the earlier car. The dash is also totally different, since Alfa installed two funky pods above the main gauges.
The extra grunt of the 2.0-liter engine is instantly noticeable. While this is still not a fast car–whether your yardstick is a Sunbeam Tiger or a Triumph TR6–the upsized engine is very entertaining. And unlike the aforementioned Triumph, the Alfa’s twin-cam engine sounds and feels more like a modern Honda or BMW than the Triumph unit could ever dream of being.
On track the steering that seemed too heavy in the paddock lightens up to precise perfection. The extra torque is noticeable, too: The hairpin that required second gear in the earlier car is easily handled by third in the later one.
While the body roll is a bit more excessive, this later car seems to turn in better. This could be due to improvements that Alfa constantly made, or it might just be a factor of the owner’s alignments settings. 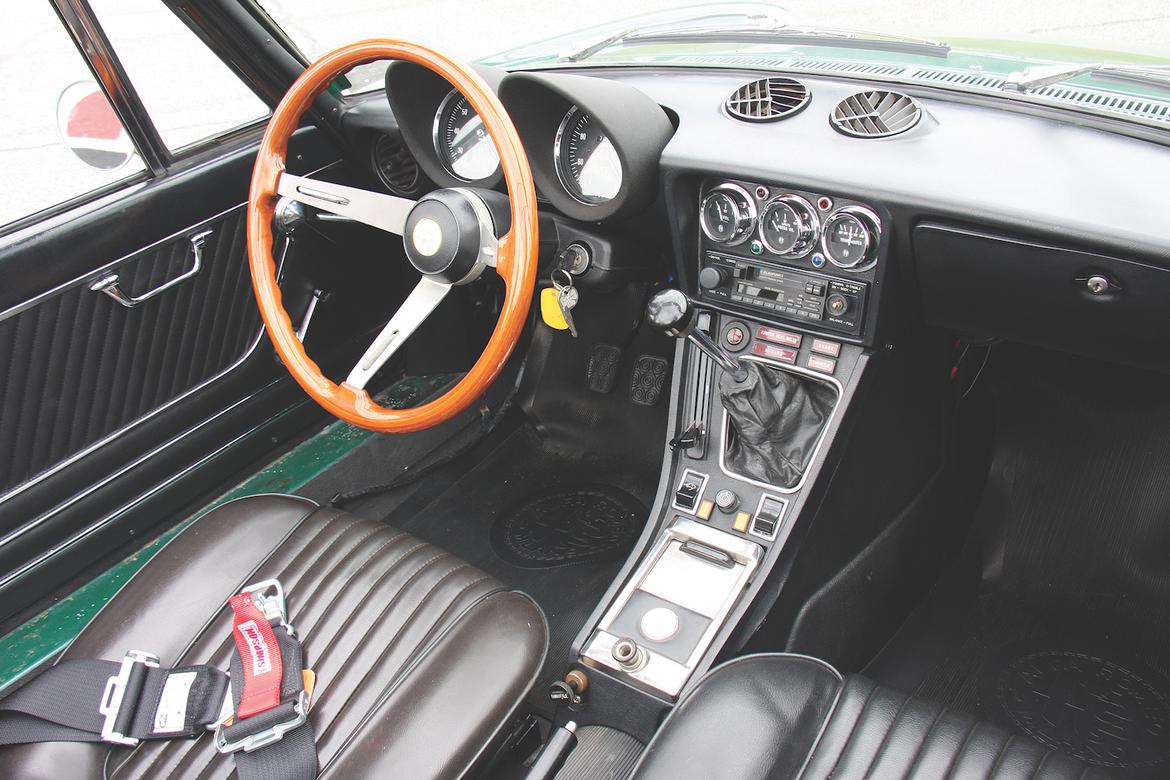 Closing Thoughts
While the classic boat tail is gone, the upgraded engine quickly makes you forget the loss. 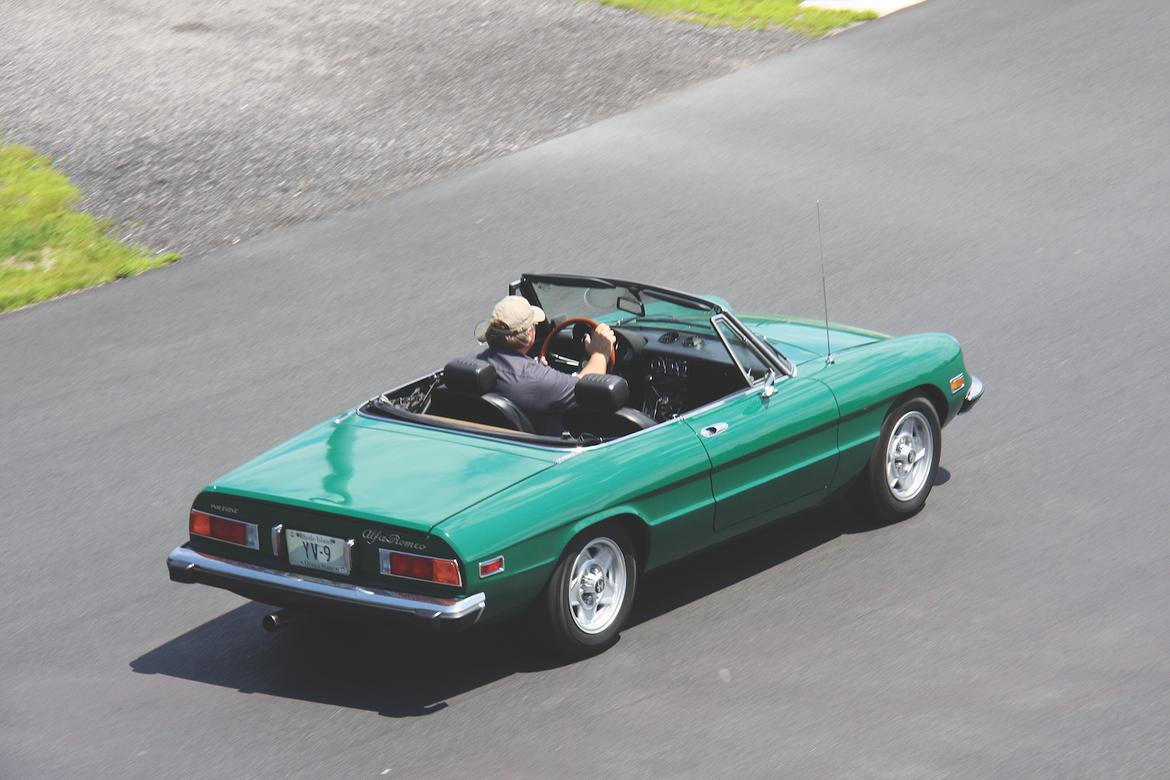 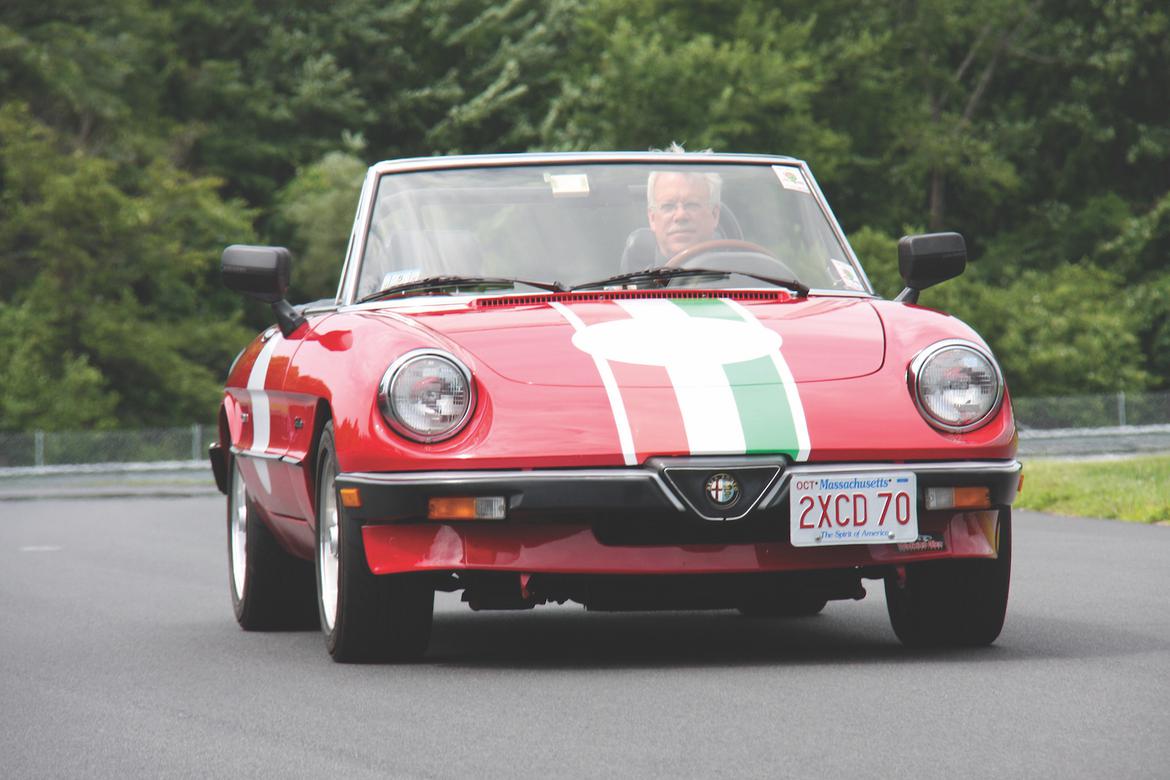 The Spider, originally a product of the ’60s, was refreshed for another decade in 1982. The Series3 Spider faced a different reality, too: By 1982 Triumph and MG had left the American market, the Porsche 914 had come and gone, and Fiat had handed its Spider sales to Pininfarina.
Updated rubber bumpers could be found at either end of this Spider, while the trunk lid was capped by a black rubber lip spoiler. Alfa Romeo retained the 2.0-liter engine, but Bosch’s L-Jetronic fuel injection replaced the mechanical setup that had been used for more than a decade. After 1985, drivers also faced a new gauge cluster and center console. The model name was simplified, too: Spider Veloce.
In a nod to the movie that made the car a star, from 1985 through 1990 American shoppers could opt for a lower-priced variant called the Graduate: steel wheels, manual windows and vinyl seats. 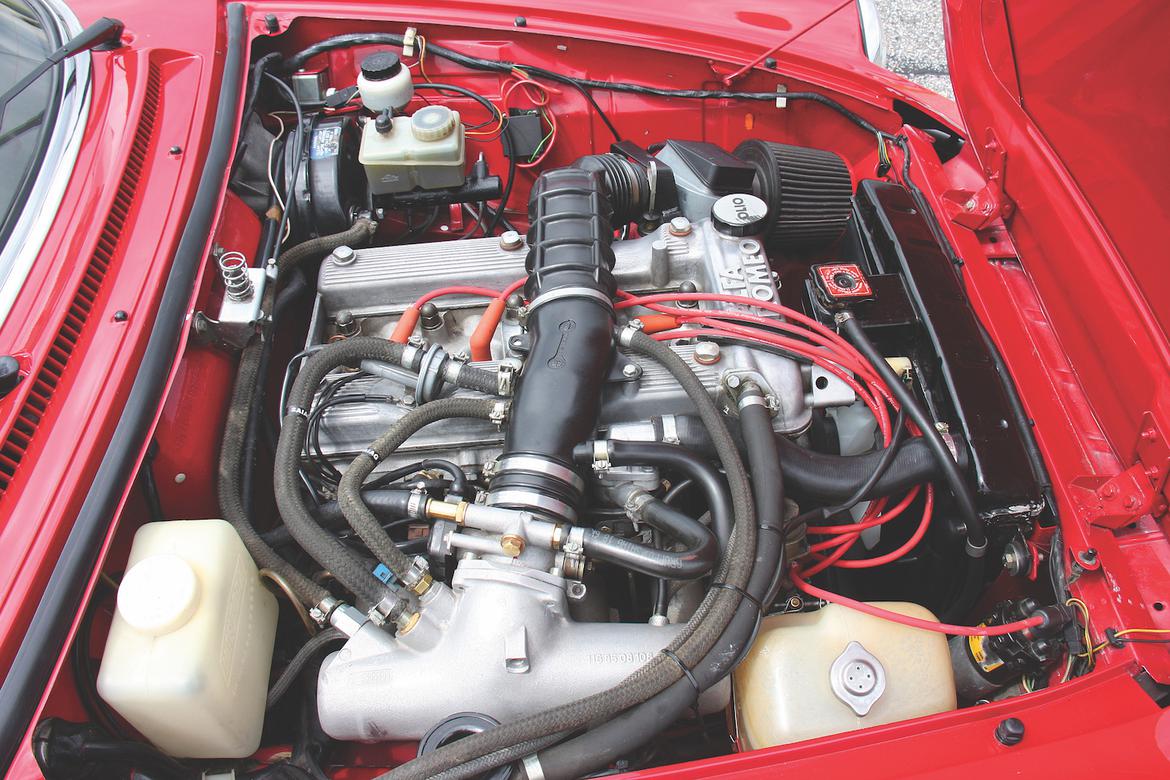 Behind the Wheel
The 1986 Spider is a different car from its predecessors. While the steering is still unassisted and heavy in the paddock, the seats are the best of the bunch. The interior has lost much of that classic Alfa charm, however, and looks like almost any car from the ’80s.
The Bosch electronic injection makes this one feel more modern than the earlier Spiders, too, and once on track the modified suspension on this car really shines. Jay’s Alfa has virtually no body roll and is nearly neutral, as opposed to the first two cars that started to understeer when pushed.
Here is a car that feels totally at home on a race track and begs to be driven harder than our lack of helmets and racing safety gear would allow. 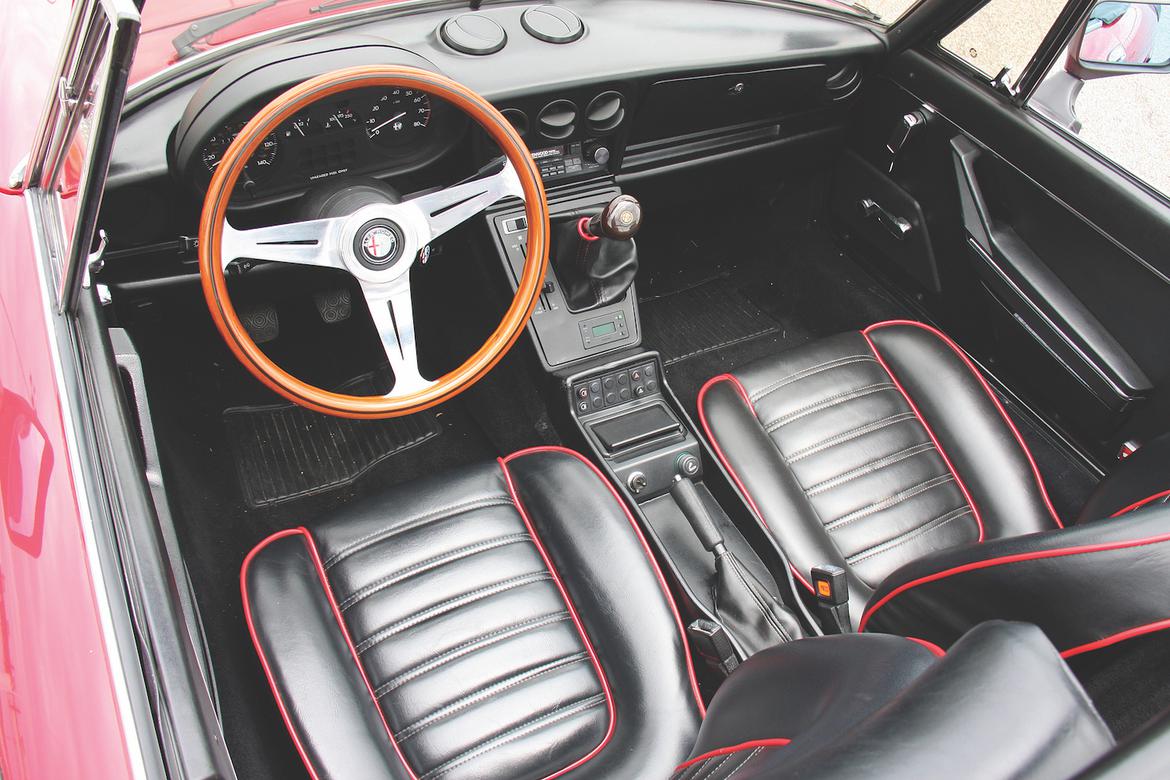 Closing Thoughts
The Series 3’s slight loss of charm is negated by a more thrilling driving experience. Don’t rule out a mid-’80s example in your quest for the perfect Spider. 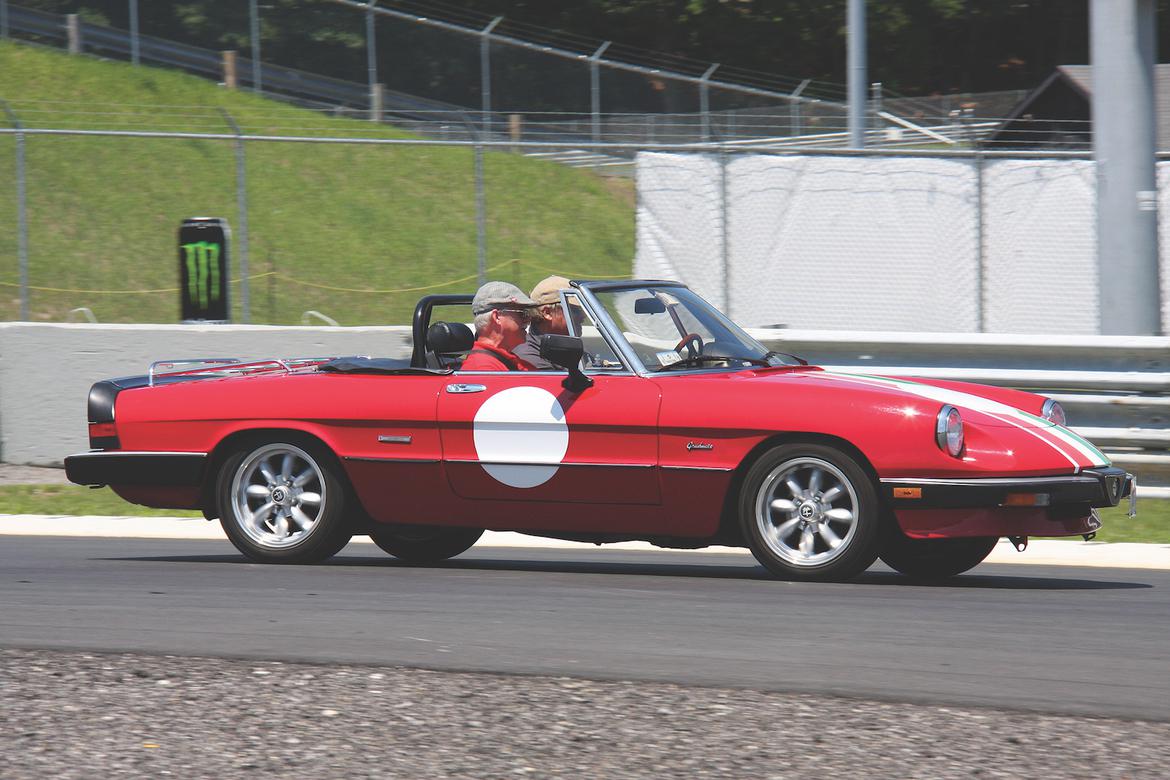 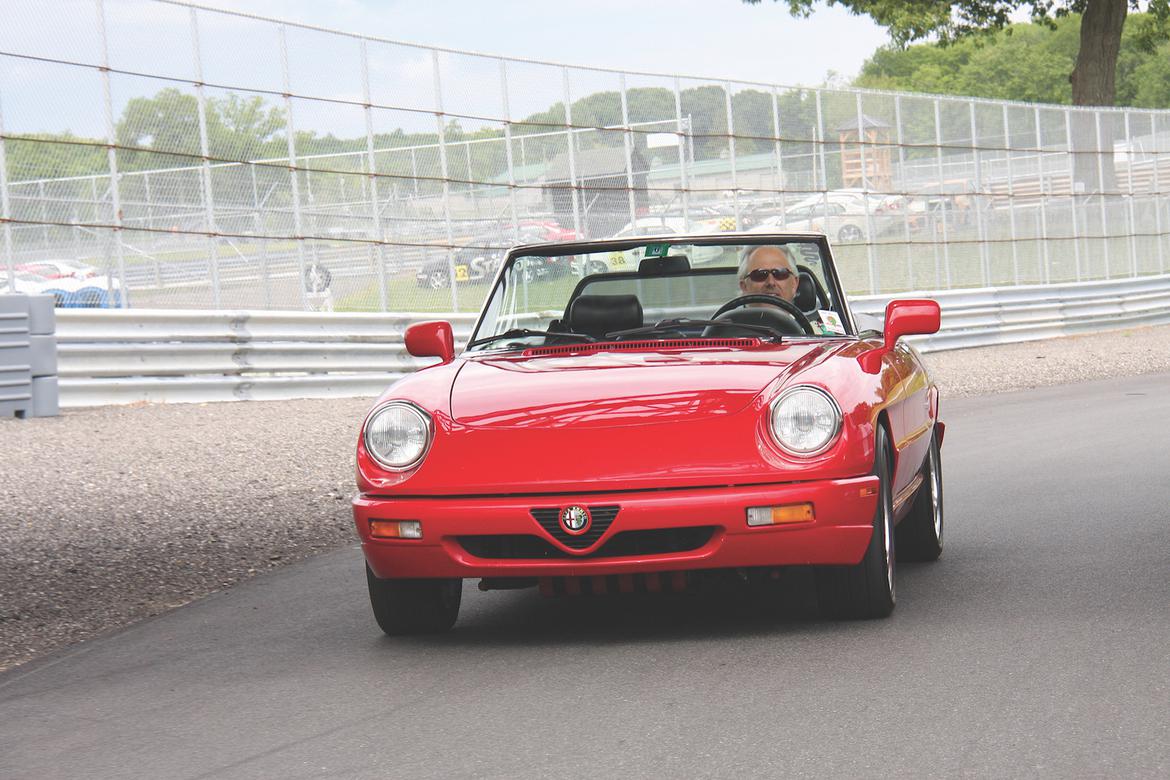 Much like those geniuses in Stuttgart, Alfa Romeo’s engineers went ahead and just updated their proven design for a fourth decade. The Series 4 got smooth, body-colored bumpers that gave that born-in-1966 body a thoroughly modern look, while the lopped-off Kamm tail gave way to one that sloped outward towards the bumper; gone was the rubber rear spoiler. That new rear held tail lights that nearly mimicked those found on Alfa’s 164 sedan.
The trusty 2.0-liter engine saw another induction change, this time to Bosch’s then-current Motronic injection. American-market Series 4 cars didn’t show up until the 1991 model year, when they arrived complete with an airbag in the steering wheel. American shoppers again had a choice, too: the standard Spider or the upmarket Veloce.
Alfa Romeo ended Spider production in 1993, and soon announced that they’d be leaving the American market. As a final gesture, 190 copies of the Spider Commemorative Edition came stateside for the 1994 model year (though they were produced in 1993). These CE cars sported burl wood interior details, gold wheel center caps and unique badging. 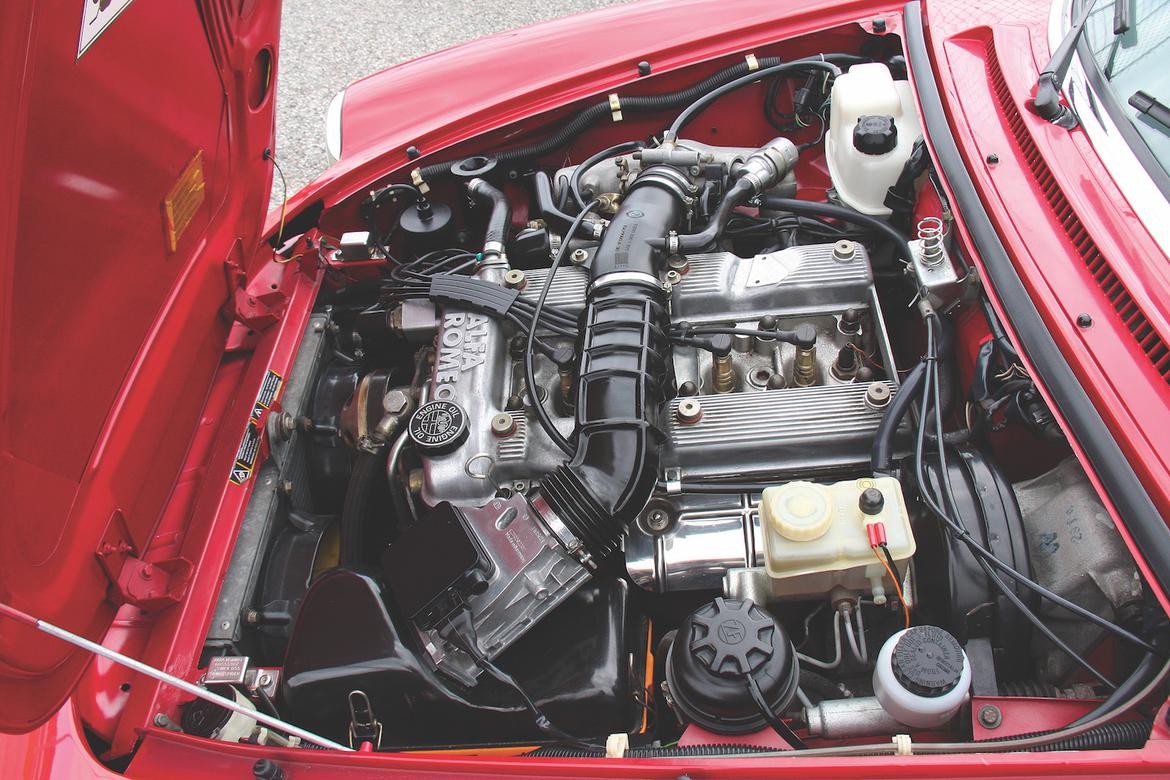 Behind the Wheel
The 1993 Spider feels like the 1986 model, but even more modern. This car drives more like a late-model Honda or Toyota than the earlier Spiders.
Our car owner agrees: Other than the 1986 Spider’s lack of power steering, the two cars deliver nearly identical driving experiences–which means the good ergonomics plus power steering, power windows and air conditioning. While the later car delivers a bit more body roll, it’s so easy to drive: Point it where you want to go, and eventually you’ll get there. 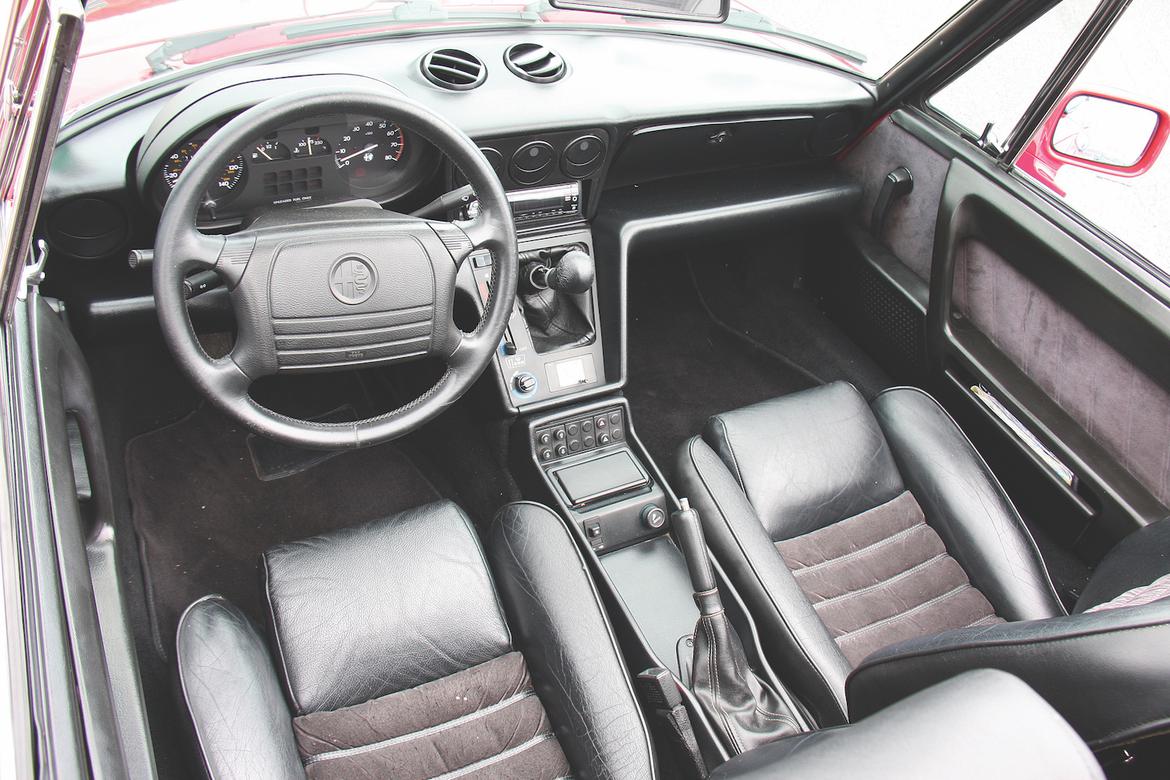 Closing Thoughts
While the Alfa heritage can still be felt, a lot of the spirit and, admittedly, some of the weird quirks, are masked in this Spider. 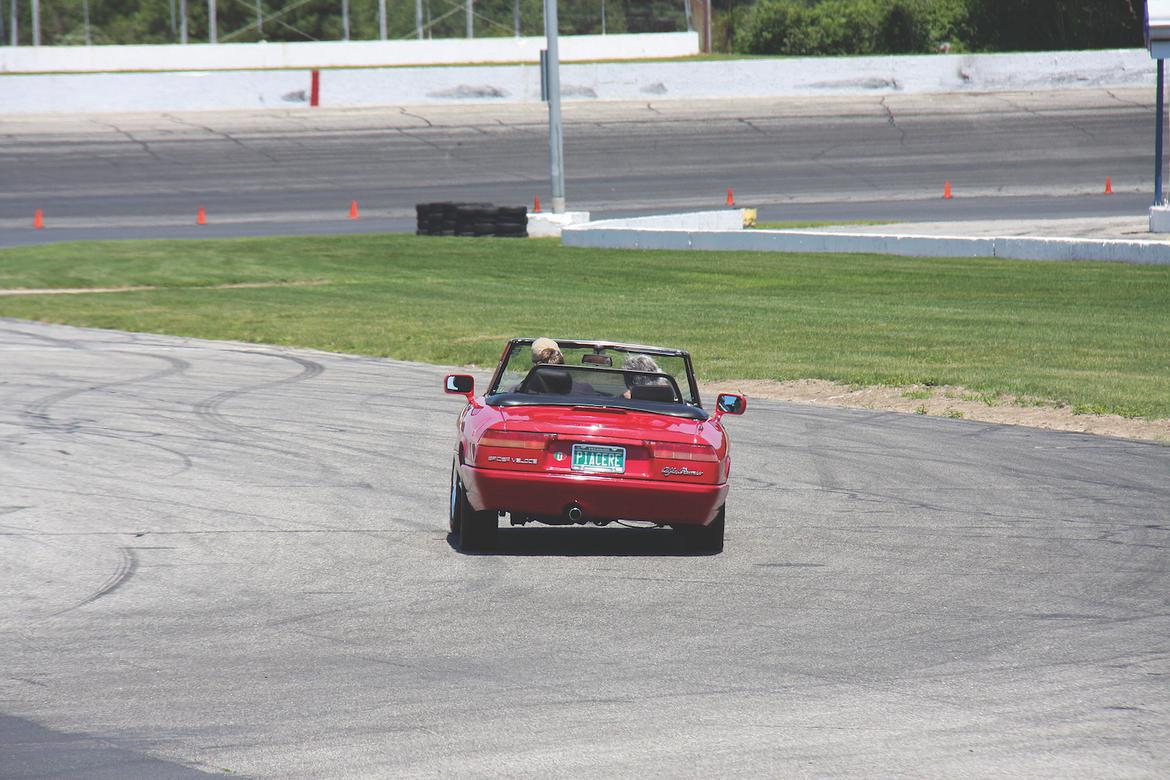 Designing the Alfa Romeo Spiders was fun, nothing extraordinary, but really enjoyable, as the car itself. This is probably the most popular Italian roadster, or spider I should say, as it's a bit more fancy and Italian.