By Staff writer for Classic Cars on April 23

Even though it inherited one of Alfa Romeo’s most famous race engines (the V8 from the 33 prototypo), few remember the Montreal as a race car. This one, built to Group 4 specs, was destined to shine in France’s 1976 Tour Auto. But before the race, it was unceremoniously cast aside. 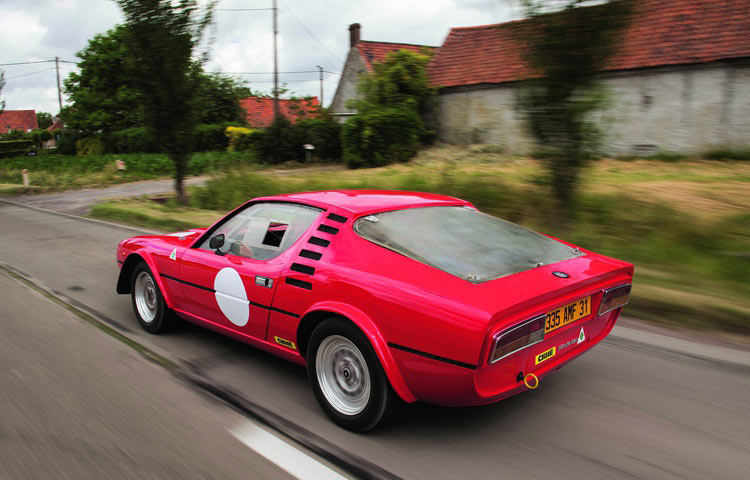 It looks sensational. And that’s before you hear the V8 bellowing far and wide.

This car rips a metallic noise that one would more likely associate with a big-block Ford. It copies its note from the Slayer songbook, not Pavarotti’s arias.

While it can make the earth tremble and the glass shatter, the Alfa Romeo Montreal never made a dent in motorsports history. What happened? 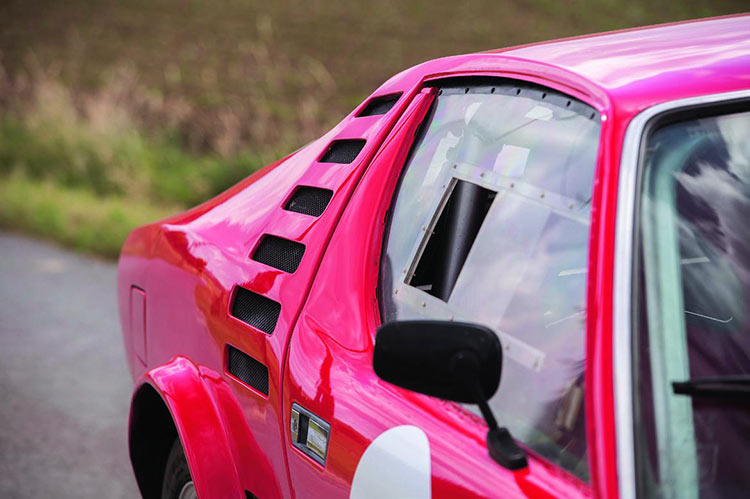 When it made its debut at the 1967 Montreal world expo—the inspiration for the car’s name-no one questioned the sheer beauty of the Alfa Romeo Montreal concept car. Its signature reads Marcello Gandini, a designer of Stratos, Miura and Countach fame.

The view under the hood, however, was less inspiring. The concept was based around the inline-four that Alfa Romeo used in its GTV and other smaller cars. After the lukewarm reception, the manufacturer responded boldly: It gave the Montreal a civilized version of the 2-liter V8 found in its Tipo 33 prototype race car. Displacement was enlarged to 2.6 liters, with output hitting 200 horsepower. The Montreal was production-ready in time for the 1970 Geneva Motor Show. Bertone, for whom Gandini was working, was not only responsible for the design, but also the assembly of the cars.

The gas crisis in 1973 took its toll, though, and the Montreal quickly faded into the background alongside other V8-powered victims of the era, including the Lamborghini Urraco and the Maserati Ghibli. Between 1971 and 1977, Alfa Romeo sold only 3925 Montreals. Pretty, yes, but just not the right car for the time. 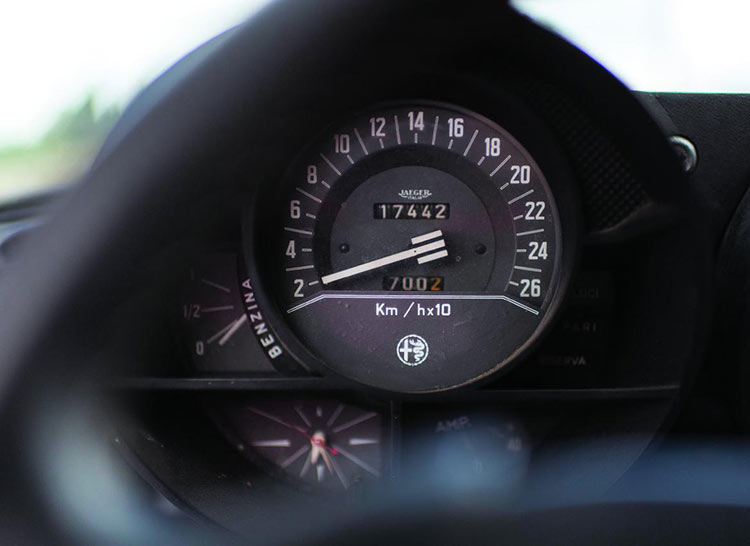 But in 1971, fuel still flowed and spirits were high. A Montreal had just been delivered to Alfa Corse, the firm’s competition department, so it could explore the possibility of campaigning the car in FIA Group 4. But the project lingered. At the time, the firm was plenty busy with the 33 prototype race car and the GTAm sedan.

Early in 1972, though, Autodelta boss Carlo Chiti received an unhappy visitor from the United States. Bob Cozza was an Alfa specialist and the man behind Bobcor Racing, a team that had successfully run the Alfa Romeo GTA in the SCCA’s 2.5-liter Trans-Am class. They hadn’t won, though. Peter Brock’s factory-backed BRE team turned the Datsun 510 into a champion, claiming titles for John Morton in 1971 and 1972.

The SCCA prohibited the higher-spec GTAm from Trans-Am competition, so Cozza had to look for alternatives in order to keep his race team competitive. A possible solution sat in his driveway: his own Montreal.

Cozza got support and a $100,000 check from Alfa Romeo USA, and took both to Chiti: Could Autodelta help develop a Montreal race car for IMSA competition?

Chiti’s initial reaction was enthusiastic, and he claimed that he would have the car ready in less than a year. But when Cozza returned later in 1972, he was not pleased with what he found. Not only had Chiti developed the car for international Group 4 regulations instead of IMSA, but it was slow as well.

Following up on a hint from Autodelta test driver Teodoro Zeccoli, they dropped the 2.6-liter engine in favor of the 3-liter V8 that Alfa was using in its latest versions of the Tipo 33 racer. The V8’s 370 horsepower at least solved the power problem.

Cozza got his Montreal ready in time for the 1973 Watkins Glen 6-hour contest, a race for the World Championship of Manufacturers. The Group 4 Alfa Romeo was eligible, and it ran alongside the Porsche 911 Carrera RS, Ferrari 365 GTB/4, De Tomaso Pantera and big-block Corvette. Zeccoli qualified 12th in class, but the car blew an oil seal 2 hours into the race and failed to finish.

The Group 4 Montreal ran sporadically in 1974, but its forward weight bias caused handling issues that kept it from ever being competitive. Alfa Romeo told Cozza that there would be no further development of the car, and that was it for the Montreal’s American professional racing career. 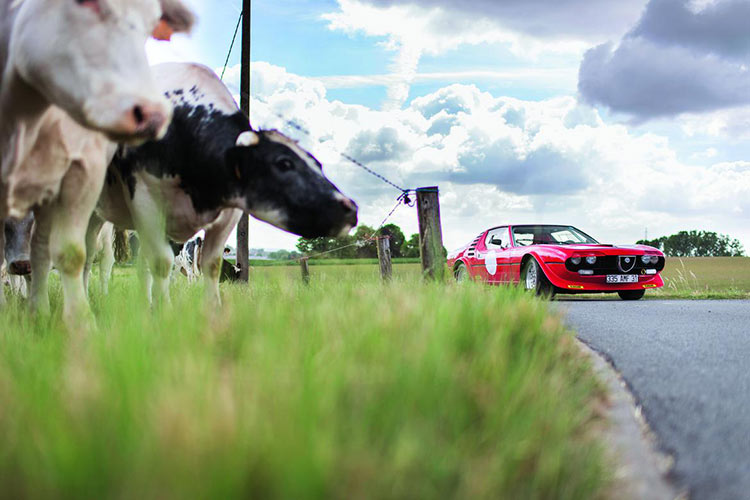 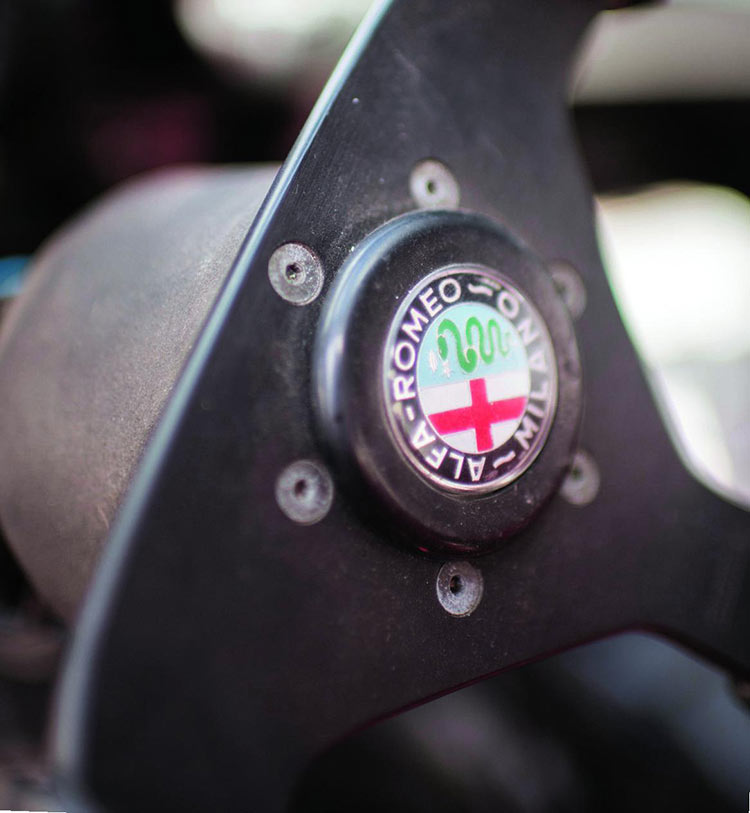 In Europe, meanwhile, the model wasn’t faring much better. Autodelta showed its own racing Montreal at the 1973 London Racing Car Show. It was also built to Group 4 specs and had the 3-liter V8 engine, and its career turned out to be just as illustrious as its American cousin’s.

The German Alfa Romeo importer then entered the car in the 1973 World Championship for Makes series with Dieter Gleich behind the wheel. Its debut at the 1000-kilometer Eifelrennen at the Nürburgring revealed it was slow, as it qualified in 44th position. It was unreliable, too, leaving the race early with engine woes.

The Montreal showed some potential when it finished third in the 1973 contest at Zolder, but it also turned out to be the best race finish the car would ever achieve. 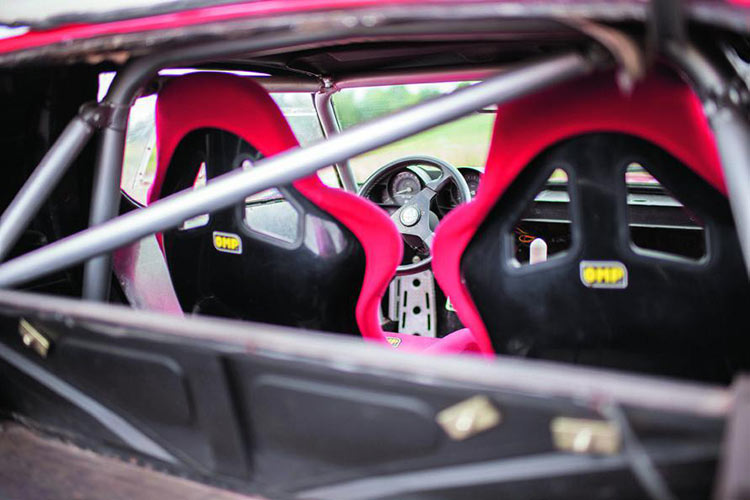 One look at the beautiful Montreal makes it easy to understand why people refused to give up on the idea that it could be distilled into a decent racer. Despite its predecessors’ dismal racing records, another example was tapped to compete, this time in the 1976 Tour Auto. Alfa Romeo dealer Jean-Loup Thepenier prepared the car, and Stanislas Machoir had dibs on the driver’s seat.

Like the ones before it, this race car was built to Group 4 specs, losing the bumpers while receiving an impressive wrap-around skirt package. The front spoiler’s lip added seriousness to its pretty face, flowing toward the wheel arches in one swift movement—simply one of the most beautifully executed studies in practical design. Motorsports often favors function at the expense of form, but this time someone actually tried to inject some aesthetics into the equation.

The rally-ready Group 4 Montreal looked and sounded the part, but Machoir and Thepenier decided to dump it and use an Alfa Romeo GTV instead. Machoir placed 38th out of 50 finishers in the race.

Why shelve the Montreal before the race? “It was clear early on that the Montreal never stood a chance in its class,” says Machoir, now an auction specialist. “It was never going to be fast, whilst the GTV was a very serious contender in the 2-liter class.”

His shoulder shrug is significant: Looks only count for so much. 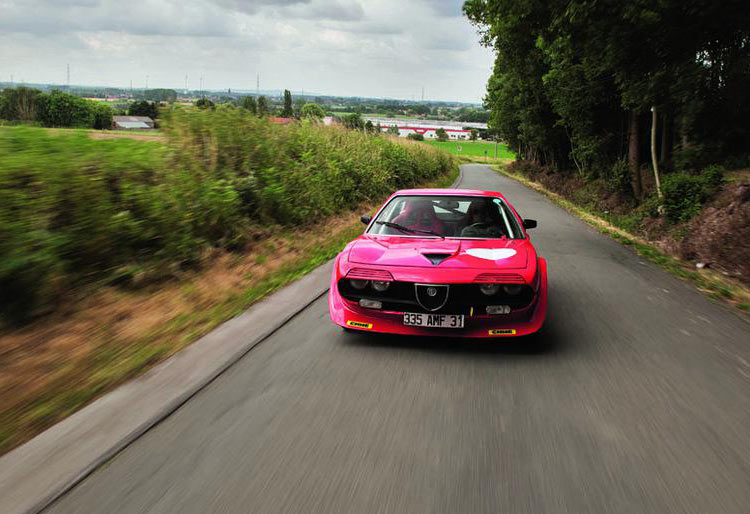 Unlike the other Group 4 builds, however, this Montreal kept the 2.6-liter V8 engine. It served up only 220 horsepower, just 20 more than a regular Montreal, but sounded like Lucifer’s army crashing through the door. 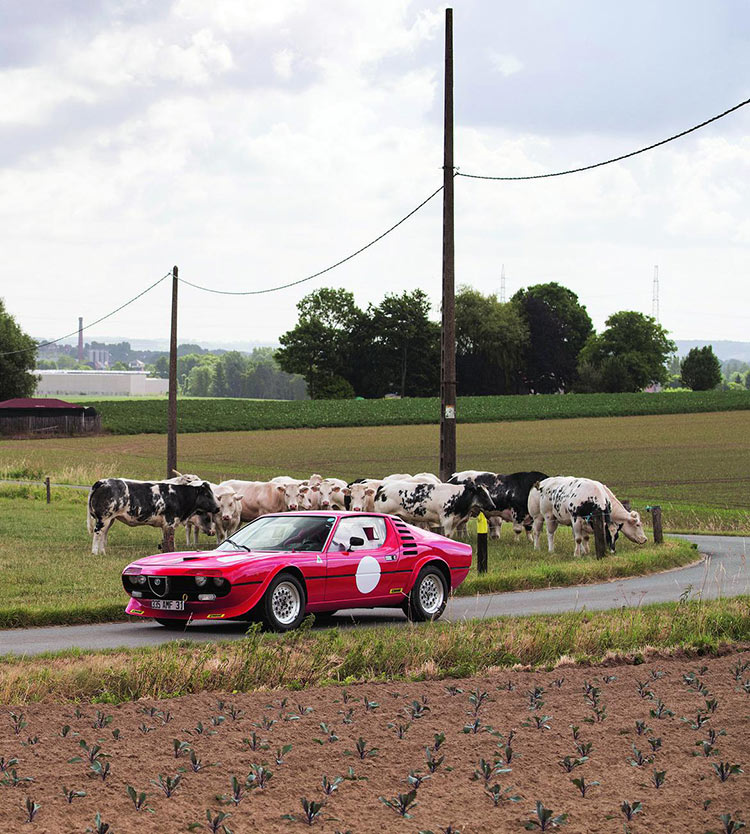 Yet somehow the Montreal remained unfinished business for Machoir. After a fruitful career in contemporary racing and rallying, he gravitated toward historic racing in the late ’90s. The Alfa was still on his mind, and he grew determined to get it back.

A long search led him to his disregarded steed, which he bought, refurbished, and relieved of even more weight. In 2001, Machoir and his resurrected Group 4 Montreal entered the Tour Auto–only to register a DNF late in the final stage of the rally. 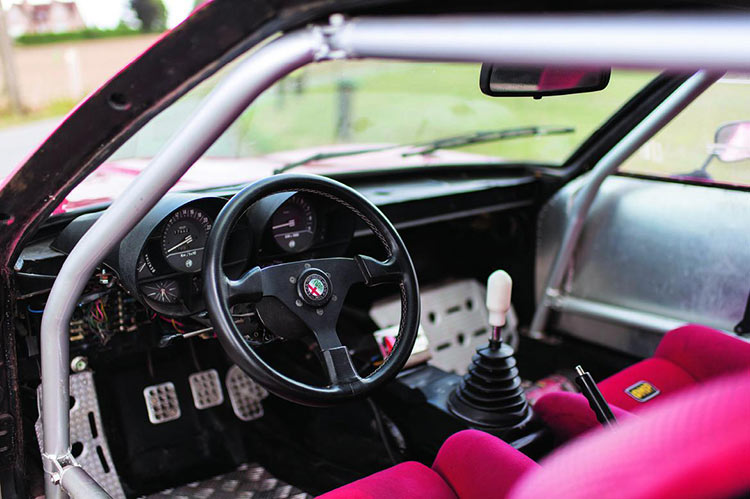 And then Machoir decided to let go of the car. “I have always been one to drive different cars,” he explains. “I didn’t stay too attached to one particular make. Learning from different cars was much more important to me.”

The car now resides in Belgium and still manages to attract a crowd. Its shape is distinctive, its voice hard to forget. It’s like hearing Joe Cocker and seeing Cecilia Bartoli appear: strange yet somehow mesmerizing.

Yes, the car is ultimately flawed and never managed to put a dent in anyone’s armor, yet it remains an arresting footnote in the long lore of racing Alfa Romeos. 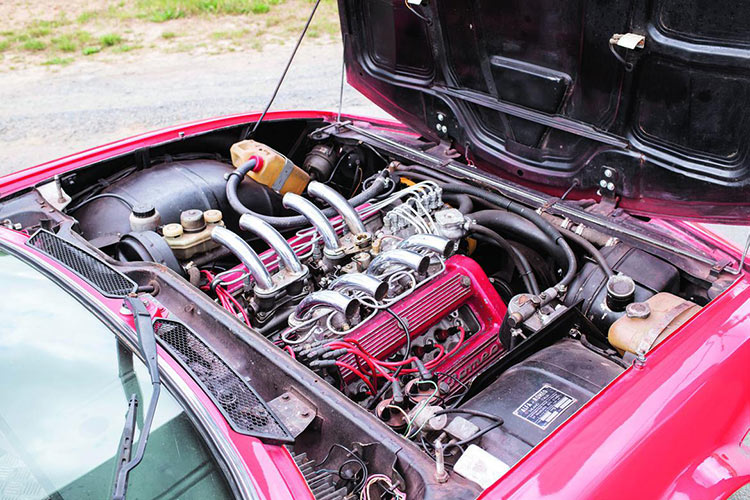 The Montreal is one of the nicest car produced by Alfa Romeo. I'm not sure what's the magic, but it works very well. Even when the car is parked, it seems to go fast. It's agressive and at the same time classy, areal Legendary Italian "Bella Macjhina"