This 1965 Dodge Coronet is a recreation of the very beginnings of what became known as the Funny Car class in drag racing. Once racers like Jack Chrisman started putting blown or injected engines running nitromethane into modern cars starting in 1964 there wasn’t a class for them in NHRA competition. But they were instantly popular. So the NHRA started letting them run against whoever would challenge the fast sedans in what is called a match race. Fan popularity continued. Cars like this Coronet is why Funny Cars got their derogatory name. 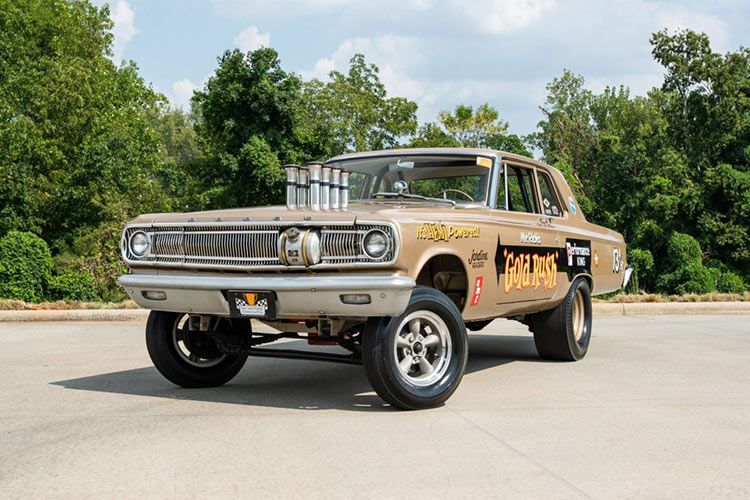 The big problem in the 1960s was getting traction 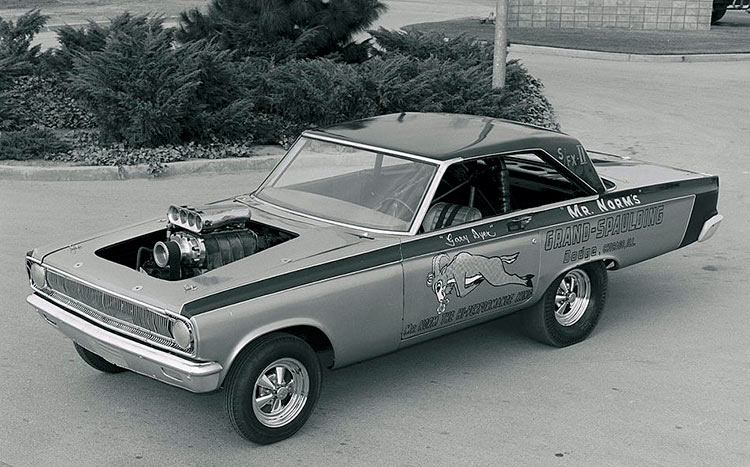 The big problem with many of the “door slammer” classes in the 1960s was traction. These production cars turned into fuel coupes that had no weight in the rear. Their powerful engines blew the tires up in smoke. So builders slowly started altering the wheelbases to get more weight on the rear tires. Basically, they shoved the body back and the chassis forward. Altering the wheelbases made the cars look “funny.” The description stuck and by 1966 Funny Cars were the most popular class in NHRA drag racing. 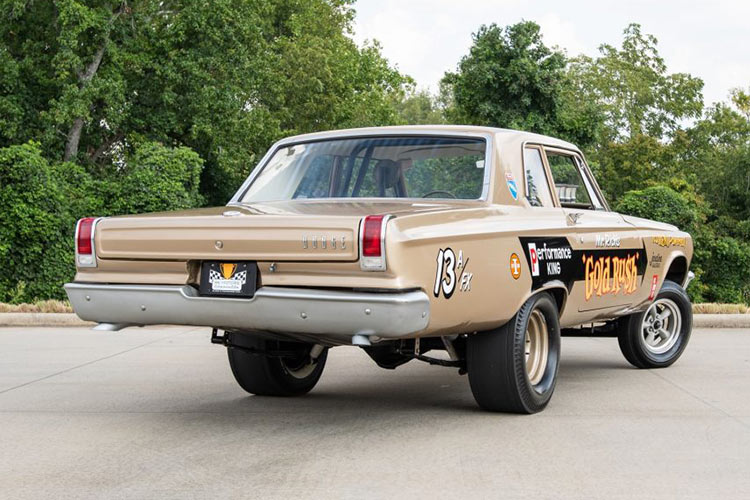 This 1965 Coronet is an homage to those golden days of drag racing. Before the all-tube chassis and fiberglass bodies, this was the seed that sparked the Funny Car zeitgeist. But this creation takes the best of the era and combines them into the perfect embodiment of the time. Built by Richard Lefebvre in the early 2000s it started out as a lowly six-banger stripper. 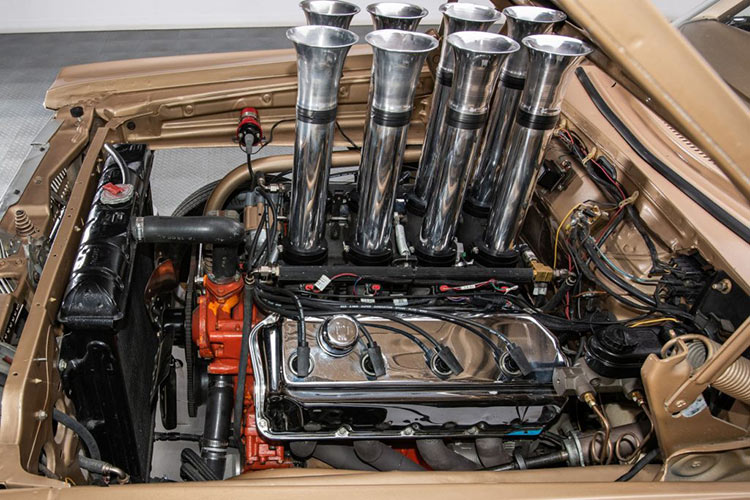 He altered the wheelbase, pressed out the body, and added the chassis supports up front for the injected 426 Hemi engine. The injection is now electronic-back in the day they were mechanical injection. The engine has been punched out to 511 ci. It’s backed by an A727 three-speed automatic transmission. The rear end is a Dana 60 with posi-traction and 4.10 gears.
Manual steering, small drum brakes, no radio, heater, or rear seat; these were stripped for racing. The seats came out of the Dodge A100 vans because they were cheap and lightweight. Plastic side windows, lightweight mag wheels, and factory altered grilles with single headlights pared-down weight some more.

Eight-second passes for what looked like production sedans were surreal 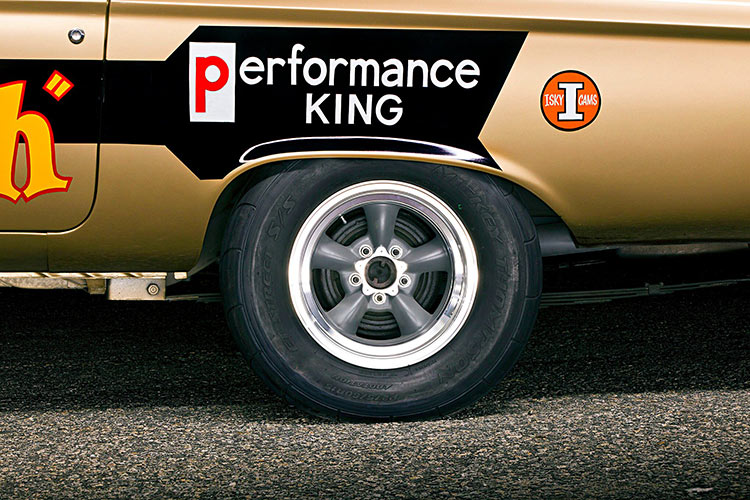 Eight-second passes for what looked like production sedans were considered surreal. In just a couple of years, Funny Cars would run mid-six-second times in the quarter-mile. This from the continuing combination of further reduction of weight combined with more power. Some of that extra power was from using stronger mixtures of nitro. Eventually, racers would run almost 100% nitro, but not in these early Funny Car days. 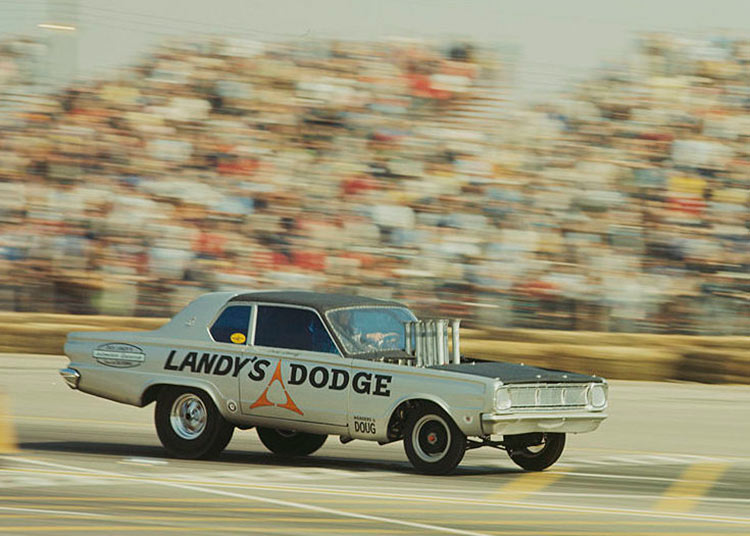 Around 2015 this Dodge Funny Car was freshened up by American Muscle Car Restorations. They detailed the Coronet to a Concours level. Altered wheelbase cars of the era were never finished to this degree. Now it is for sale for a cool $100,000.


RK Motors in Charlotte, North Carolina, has the consignment. The factory-like gold paint, period-like graphics, and contingency decals scream the mid-1960s. As far as we know this 1965 Dodge Funny Car can be driven on the street which was not the case back in the day. 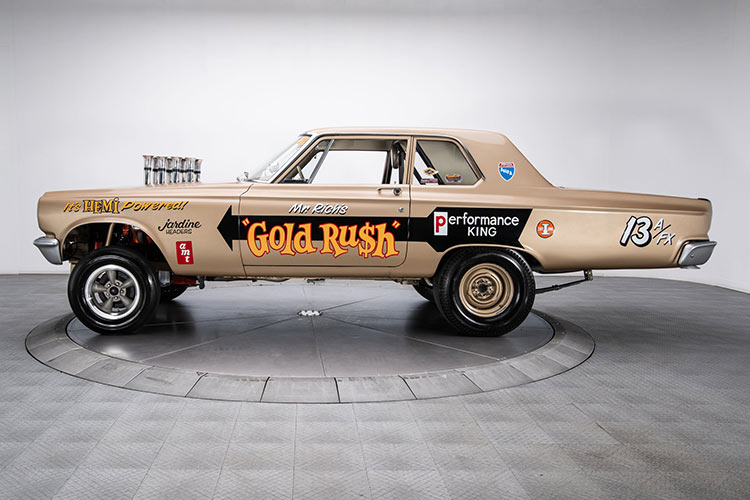 HaHaHa, that's a funny car! And it was fun to illustrated the Dodge code A990 and the Funny Coronet. I was not sure if I wanted to illustrate the "Gold Rush" instead of another team, all of them were amazing racers, I couldn't favored one over the otherof these Legendary dragsters. So I created Team Legend Lines, the fastest of all the Coronet... at least on T-Shirts!