“Vanishing Point”; it’s a name well known in the Mopar community. Many have seen the movie but surprisingly, quite a few haven’t. Spoiler alert below! Released in 1971, “Vanishing Point” tells the story of Kowalski, a guy who makes a bet that he can deliver a car from Denver to San Francisco in just 15 hours. It’s not long before he attracts the attention of every law officer on the west coast. With some help over the radio from a DJ named Super Soul, Kowalski partakes in one of the longest car chases in movie history. In fact, most of the movie is a car chase. 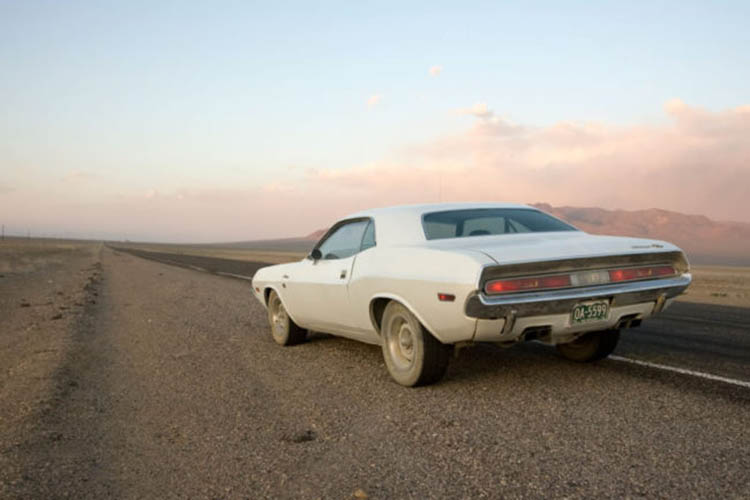 “Graveyard Carz recently shared some interesting facts about the movie car used in their blog and we’d love to share it with our readers; while adding a few facts of our own! 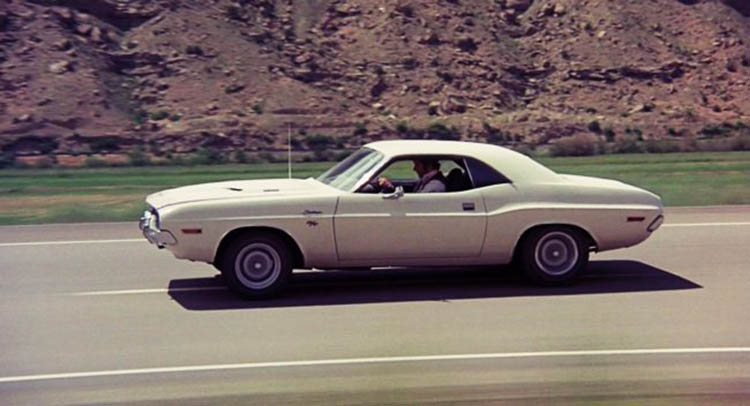 1. The car featured in the movie is a 1970 Dodge Challenger R/T powered by a 440 four-barrel and A-833 4-speed pistol grip transmission. [contrary to what a recent issue of a certain Mopar magazine might claim -Ed] Some of the rumors that have circulated say the car had a 440 Six-Pack or 426 HEMI under the hood. Nope; it was just a 440. (Although, the Challenger used in the 1997 remake with Viggo Mortensen had a 426 HEMI under the hood.) 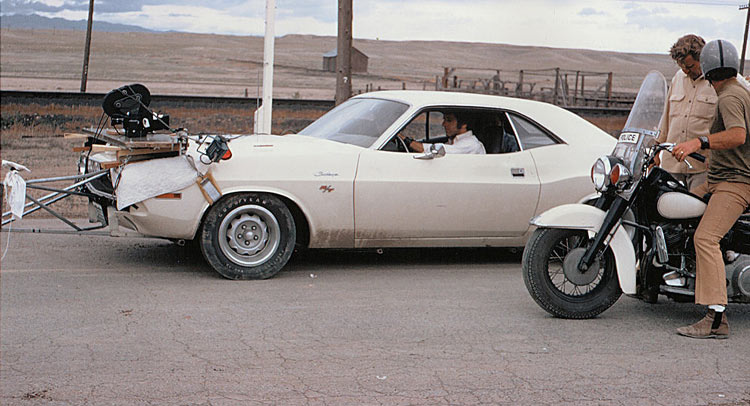 2. It’s said that 20th Century Fox studio executive Richard Zanuck wanted to do Chrysler a favor for their long-time practice of providing the studio with cars on a rental basis for only a dollar a day. Stunt Coordinator Carey Loftin said he requested the new (at the time) 1970 Dodge Challenger R/T because of the quality torsion bar suspension and for its raw horsepower. 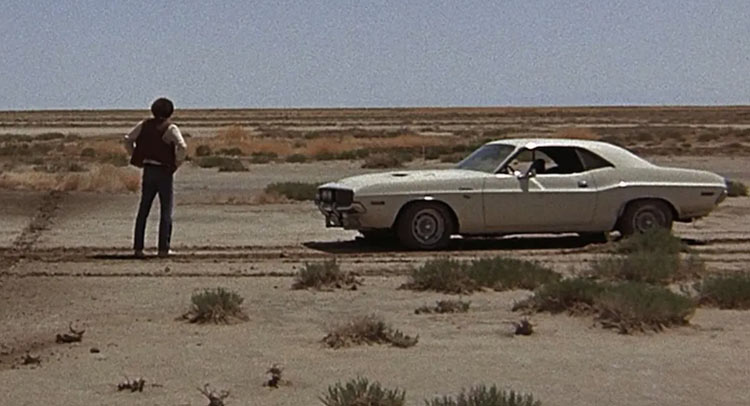 3. The car used is white; plain and simple. While many have speculated at hidden reasons for the choice of the color, white was chosen because it would stand out easily against the desert backgrounds of the movie. Due to the cars being supplied directly from Chrysler, we assume they were all factory EW1 White but we’ve heard one of the supplied cars was possibly green originally. 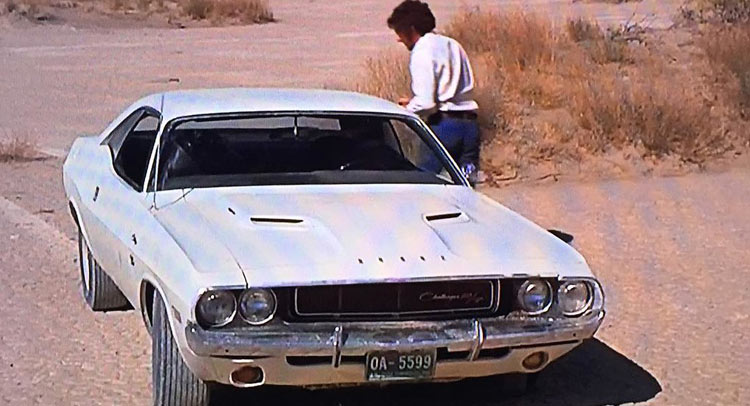 4. Chrysler loaned four cars to the studio for filming. Some say five, others say eight but our sources across the board say four. Three of them 440 four-barrel 4-speeds and one 383 four-barrel automatic. They were all badly damaged during filming. Director Richard C. Sarafian has said the cars were so badly abused that near the end of filming they had to take parts off the other cars to keep the last one running to finish filming. After filming, they were returned to Chrysler and said to have been crushed due to Chrysler not being happy about the use of drugs in the movie. 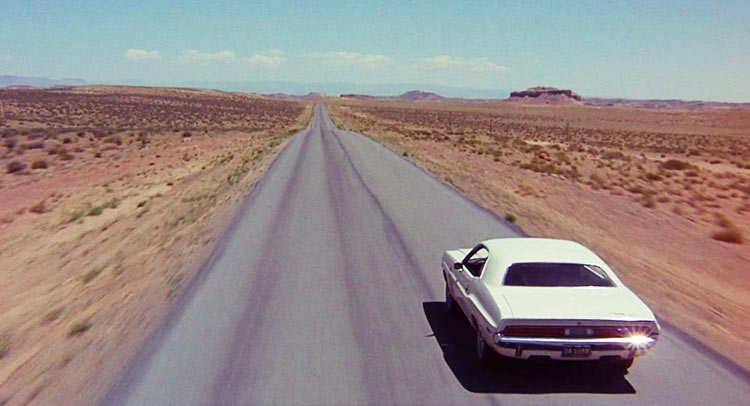 5. [Spoiler!] In the final legendary scene where Kowalski meets his end by slamming into two bulldozers at full speed, the car used for the collision and quickly followed explosion wasn’t actually a Challenger. In fact, the car used was actually a 1967 Chevrolet Camaro shell that had been filled with explosives. The Camaro was attached to a quarter-mile long cable system and then pulled to its death at high speeds by the 383-powered Challenger. 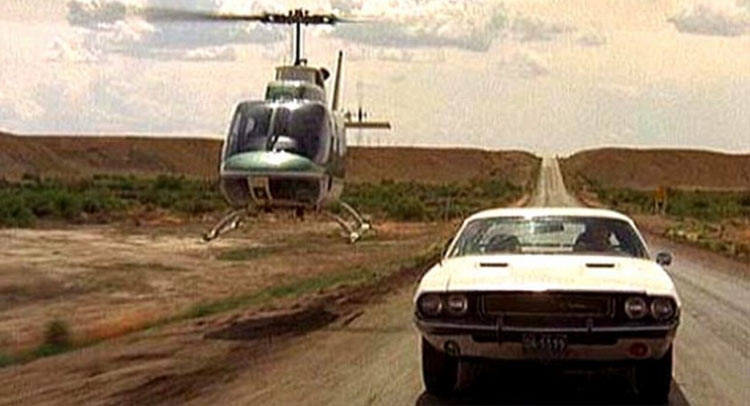 6. According to calculations made by Graveyard Carz, assuming that Kowalski traveled primarily via Highway 50 from Denver to San Francisco, which is approximately 1,214 miles, he theoretically could have made it, had he averaged about 81mph. Of course, if he didn’t crash the car into the bulldozers. 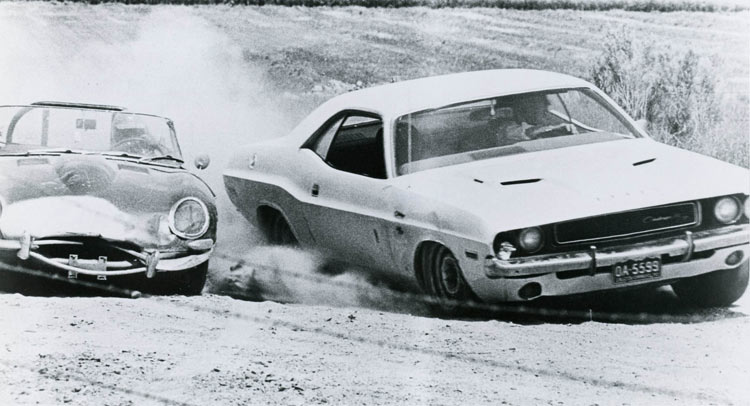 This movie, or to be more accurate, this car left a huge imprint in my early age... Of course my parents did not let me see the movie before my teenage, but early on, I remember seeing some of the stunts: the chase with the E-Type, the police chases, the Challenger skidding in the desert... and I could reenact all the scenes with my little red Matchbox. I was under the spell of this Legendary muscle car. Of course the Challenger has a premium place in the Dodge collection: This is the car I have designed with the most of features. Bulge or shaker hood, stripes or not, RT or Hemi, hardtop, coupe or convertible, a real catalog by itself.